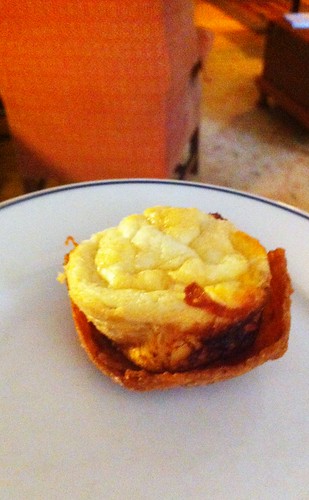 Emu egg frittata in a bacon cup, a photo by aghrivaine on Flickr.

Make bacon cups on the bottom of a cupcake tin.

Pre-heat oven to 400F. Preheat a cupcake pan in there.
Get the emu egg out of the shell. Quite a project!
Put the egg, salt, seasoned pepper, savory and truffle oil in a mixing bowl.
With an immersion blender, blend with an up and down jerking off motion until it's frothy and substantially increased in volume.
Whisk in the shallot and garlic.
Put the heated cupcake pan on the stove on high, pour in a little olive oil to each cup. Heat until it's shimmering.
Pour in about half the cup of egg mixture.
Top with red onion and cheese. By the time you've done that, the egg mixture will be ready for the oven.
Put it in the oven, for about 10 minutes or so. Jiggle it occasionally, when the middle is just set, pull it out and let it rest for a minute.
Take the fritattatas out of the cups and put them in a bacon cup each.