Run For Your Lives 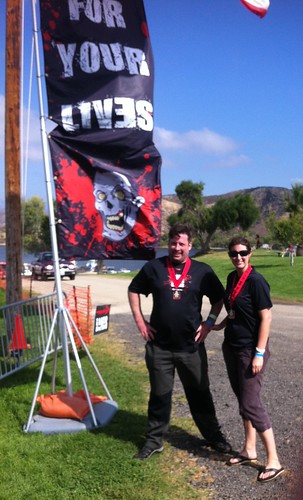 Finishers but uhhhh not exactly survivors., a photo by aghrivaine on Flickr.

Saturday, I got up at the crack of dawn, and was none too happy about it. Then we drove a couple of hours through infuriating traffic in order to be chased all over a canyon and mountain range on a hot, sunny day by zombies; running through stinking mud. electrified obstacles, splinter-laden slides, and shifting sand dunes. And then die.

It was kind of awesome. Ok, the day had a lot of aggravations; the commute, arriving late and missing our heat, the brutal hill reminiscent of Heartbreak Hill (aka Motherfucker) at Ft. Knox, and ultimately discovering that the only people "surviving" the race were cheating. And then being covered in stinky lake mud with no place to clean off that wasn't also stinky lake mud.

But I certainly learned something about the zombie apocalypse; it's not the first or even second group of zombies that'll get ya - it's the third or forth, that you stumble into when you're completely gassed from outrunning the first lot. There's no cardio training in the world that can get you ready for that.

I was sore the next day, but I guess I did enough training runs that it wasn't too bad, because I wasn't paralytically sore, like I half expected. Just honestly sore, from a serious day's work.

Would I do it again? I don't know. Maybe? But honestly I was one of the oldest competitors there, and struggled alongside people 20 years younger. Maybe at 41 it's okay to not have to prove I can hack it like this?

Whatever the case - we didn't cheat, except that I gave my last "life" flag to P. so she could maybe finish alive...but just before the finish line she got nabbed. The people who "survived" had tucked a flag in a pocket for most of the race, or rolled them up around their belts so they didn't come off when grabbed, or hid them under a big shirt so only the edge peeked out. It was sort of galling to see people cheat over something so trivial; even moreso because playing fair wasn't rewarding for anything other than one's own satisfaction in playing it straight.

I wonder what the final stats of survivors vs. deaders was, and of those, how many didn't cheat at all? There were a *lot* of zombies on the course, and they were very aggressive, the majority of them sprinting at you right at the top of a hill, or the base of an obstacle. They were just doing their job, mind you, but it made the race a serious challenge; one that I was happy just to finish, even if I didn't "survive.'

In a really zombie outbreak, i would have been armed, after all. I did find that years of Aikido training made a spin-move like a Tenkan throw pretty easy to pull off, and I dodged out of quite a few grabby zeds that way - I mostly got caught out in the open trying to maneuver through a whole field full of zombies.

But, anyway - tired, sore, but I finished the dang race, by golly!