The Honeymoon: Day 15 - London and the BWB 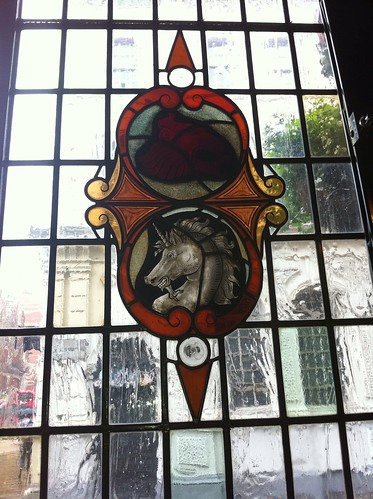 This is the only picture I have from this day in London, for some reason. I guess we stopped carrying the camera around? Maybe the memory card was full? Who knows.

We had a full cooked English breakfast at the Wellington in the morning, which was wretched. Living up to the British reputation for culinary excellence! But actually it was about the only bad meal we had in England, so honestly, the food thing is overblown.

We tried unsuccessfully to take the tube to the British Museum. Herself was feeling a little stomach distress, and she dove off just as the doors were closing. If I hadn't reacted with my ninja-like lightning reflexes, we would have been separated with little way to reconnect, since neither of us had a working cell phone. So, instead we walked, which was painful for me but not for her, so I guess that worked out.

I enjoyed the British Museum very much, especially seeing the original Rosetta Stone, as well as other priceless Egyptian relics, some of which had the absolute living likeness of Blink perched on them. I could have spent days and days...hay, wait a minute, I know I DID take some pictures, because I got some of some weird Roman armor in the British museum! I will have to track them down and finish this entry later.