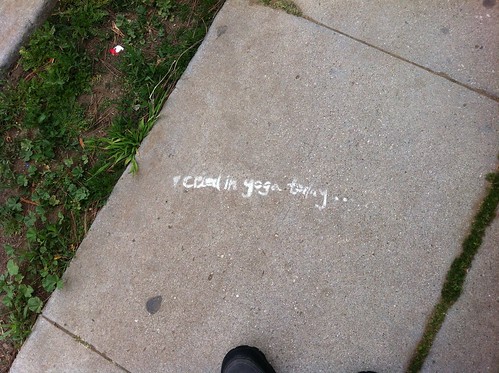 Sidewalk in Venice, a photo by aghrivaine on Flickr.

Monday I had to take my car in for the third time this year to get the radiator replaced. Fortunately, it was all on warranty, so no charge - and the root cause is now fixed as well. But I took the opportunity to walk back with Blink, and do a "Zombies, Run!" mission.

It's an iphone app that simulates missions to save a community from zombie attack using a combination of GPS and playlists. So it plays music for you, but also tells a story about the mission you're on at intervals - and also chimes in to tell you when you need to run faster from zombies, or when you've picked up supplies.

Anyway, this was more of a brisk walk than a run, but it was a clear and crisp morning with the neighborhood just waking up. We took a jaunt down Abbott-Kinney in Venice, which reminds me quite a bit of Main Street in Manayunk, PA, or maybe even the new, Gap-ified South Street. There are art galleries, weird boutiques, restaurants, bars, all the trappings of bohunk bonhomie.

As we worked our way back into the neighborhood, I saw this on the sidewalk. I couldn't help but take a picture, though Blink tried to photobomb - someone with a camera out not taking a picture of him is just crazy!

This little cri de coeur blows my mind. Who the hell cries in yoga? Who then wants to admit that publicly? And then decides the sidewalk is the right medium? And has paint handy? So much to unpack in this one little sentence.

This morning I did another zombie run, a full-on run this time, with the dog. My fastest shamble is nothing but an easy trot for him, so he wasn't even winded. We literally rocked down to Electric Avenue, which is at the end of my street. All this in service to training for a 5K "Warrior Dash" at the end of the month.

I'm definitely more inclined to exercise when I have a specific goal in mind, and nothing motivates me more than a race. I may finish last, but I'll finish, by jingo!

Then I went home and did a little yoga. And cried.