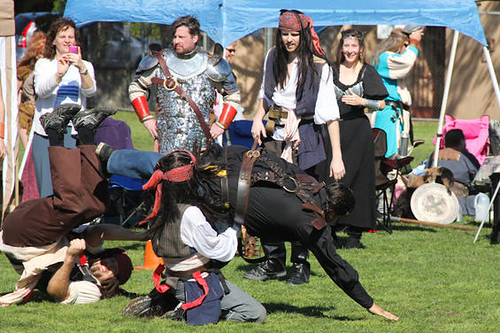 It was at a park in South Pasadena, and attendance was much bigger than I thought it would be, at least a hundred or maybe even two. In addition, Don "Grizzly" Adams was the honorary viking team captain.

The Jack Sparrows entered together, all of them eerily well put together with great costumes and players that really did resemble the original article. They had a PA system in a wagon, and marched in playing the Pirates of the Caribbean theme.

Myself and another viking warrior had war-horns, and lined up to sound the charge when the vikings entered.

Both teams had an artillery piece - a huge pneumatically powered cannon that fired soft "cannon balls" made of foam. The vikings had a trebuchet that was about ten feet tall that also fired foam "boulders." Throughout the hour-long flag football game, both artillerists fired into the players to provide distractions.

Personally I only managed to play about a quarter, and accomplished very little other than running around and making noise. There were a couple of ringers on both teams that made all the big plays, some of which were really exciting. It was a fairly close game, but at the end of the day it was 14-7 in favor of the Vikings.

We also had valkyrie "spear-leaders" who cheered. Their cheers were pretty creative, too, like, "Who's got spirit? We've got spirit! What do we do? We spear-it, spear-it!"

Of course my lovely wife,

pyr8queen dressed for the other team, but I'll forgive her, since we won. It was a strangely warm and sunny day, with a festival atmosphere all around. And it was singularly eerie to line up at the line of scrimmage and face ten Jack Sparrows, all very similar. They were really good impersonators, and it made picking one guy out to cover kind of difficult.

All around, a spiffy day.