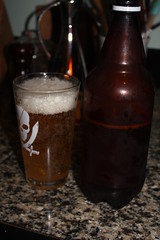 Well, the first batch of home brew - the requisites bits for which were given to me on my birthday - is done. Here it is, looking fairly beer-like and wholesome.

It is, however, not very good. At first opening it was entirely too sweet, which means secondary fermentation, which occurs in the bottle, hadn't completed.

I let it sit another week, and one of the bottles exploded. This was sort of alarming, as it took us a while to figure out what had happened to cause the weird noise in the kitchen. Normally it would be Blink, but he was in the room with us.

nephandi and I opened up a bottle after another week to condition, and then a couple of days in the fridge. It was like Karnak, or Mega-Mind, in that it had a positively enormous head. A bit like a sputnik - large in some parts and spikey in others. A virtual planetoid. I think that's what I'll call it.

I poured myself two pints of nothing but foam until I finally got to some beer. What I arrived at was a bit murky (appropriate for a whitbier) with a fairly simple flavor, masked by a bit too much sweetness.

Basically I put too much sugar in the bottles when I bottled it, and it's too foamy and still too sweet. It's drinkable, but it's not great - and the head is really, really out of control.

Fortunately I used substantially less sugar in the cider I recently bottled, so that should turn out just right, I hope.