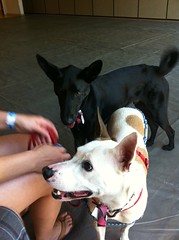 Yesterday we took Blink and Bette (pictured here) to the Nuts For Mutts Dog Show. It's a low-key dog show for mutts only, something we'd joked about doing with Blink since we got him.

We arrived too late for what I felt would have been an easy win for the Numpty - "Mystery Breed". However, he took second place in both Handsomest Dog and Perfect Mix. The surprise upset was Bette, taking first in "Ear-isistable Ears" - which I thought Blink had as a lock.

He was foiled by his own dufus-ishness, however - he spent so much time playing with the other dogs in line that the judges never got a good look at his ears but that they were flat against his head. Such a Numpty.

I do feel that he was robbed in not winning - clearly he was the most handsome dog there (or anywhere). But the judges did love him, and fawned over him quite a bit - he even had a cheering section in the stands; random strangers who were hooting and hollering for him to win.

So yep. I've got a prize-winning dog.