A Game of Thrones Party 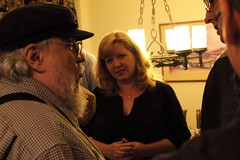 blanchemains hosted a party after he did a signing at Vroman's in Pasadena.

A lot of the old Brotherhood Without Banners turned out, and [Bad username: <br />pyr8queen] got to meet some of them for the first time. I made some clafoutis for the occasion, but they were kind of awful. Still, they'll be documented on Letters To Bourdain for the sake of completeness.

If the quality of the pictures I've been posting has suddenly dramatically improved, its' because of the camera Herself got me for Christmas, which is totally awesome. It also empowers me to take really BAD pictures, which I've been doing plenty of.