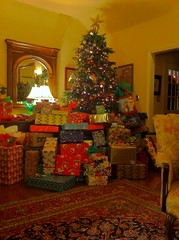 I suspect that the title of this picture, "swampy Xmas" is a "damn you autocorrect" situation. It's also possible though, that I was more drunk than I really thought, and had some meaning in mind that I've since forgotten.

Anyway, this is the embarassingly enormous pile that surrounded the tree at the SoCal HQ of the Cult of Santa Claus - which is to say

pyr8queen's family home. Christmas is the one holiday they really do full-force, and they go all out. There was literally three days of feasting and revelry - with Christmas Eve the biggest, but a huge dinner Christmas Day, and then a Boxing Day party in the home of a master brewer who really knew his stuff.

pyr8queen got me something I really wanted but never imagined she'd have got for me - a really top notch DSLR camera. There's so many great ways I can use it, and I actually teared up a little on Christmas Even when I opened it. It's somewhere in that picture, too!

That wasn't, of course, even close to the end of it - she also built a bike for me with a Captain America theme out of a combination of vintage parts and very modern components. But that's not all! She also hand-made a wooden tankard with a carved handle in the shape of Blink's head! Her family is really generous too - and that's why there was such an enormous pile of presents under that tree - so enormous we had to unwrap in two "waves" to make room for the piles.

I can't remember a more splendid Christmas, ever. And it's amazing that such a big family, full of such big personalities, could spend so much time together at close quarters (and drinking so much wine, cocktails, and beer!) and yet have not a single spat of drama, not one tantrum, not one moment of cold and stony silence over a perceived slight.

If only there had been snow! But I'd trade a lifetime of white Christmases for happy days like these. In fact, I think I did!