The Mouse Gets his pound of flesh 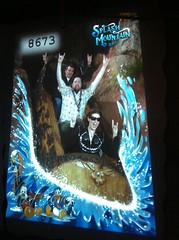 When The Hobbit was planning his trip out West, I told him we should really go to Disneyland. Like many non-believers, he was dubious, but after some convincing he came around. "What you have to understand about Disneyland" said I, "is that it's utterly un-ironic, schmaltzy, whitebread cheesy - but they're really, really good at that, and so it really is the Happiest Pace On Earth."

Upon his arrival (with his lovely girlfriend in tow) he was, like the native Philadelphian he is, dubious and sarcastic. We had a good dinner at Casablanca, drank some wine and eat some cheese, and turned in early for a day with The Mouse.

No sooner had we hit the PARKING LOT than both Hobbits were ooh-ing and aaah-ing about how magical everything was. The different levels of the lot are named after Disney characters - that's all it took. By the time we got into the park? They were un-ironically, schmaltzily, whitebread cheesily, dancing along to the music on the PA, pointing at all the holiday decorations and realizing that all their jokes about decanting the next Cinderella from the tanks were inappropriate to the Magic Kingdom. Still funny though.

It was the perfect day to hang at Das MausHaus, too - very few crowds despite a sunny, warm day. We blazed right through a bunch of rides before it got even a little crowded, then wandered over to California Adventure for drinks and lunch. We hit a lot of the high points - but disappointingly none of the good shows were playing on a Wednesday. A year after I bought my annual passport, and I STILL haven't seen Fantasmic!

By the time we were ready to leave - and after seeing a long preview of Tron in 3d with lighting and other in-theater effects - my feet were killing me.

They've actually healed fairly well, my feet - and as a result I rarely wear my orthotic inserts. Which was exactly the problem - they put my feet in a slightly different position, and the callous there has worn off. So now I've got massive blisters on both feet - and limping painfully back to the car was doubly bad. Not just the bad feets, but Herself was under a lot of work stress and flipping out all day - so my painfully slow pace drove her moderately nuts.

We came home to an exuberant dog, who'd spent some quality time with DaOgre, and took great delight in distributing BlinkPokes (tm) to all. It was really good to sit down and shoot the schnitzle with the two of them and some beer. I wish it weren't so late, and we'd had more time. Another day.

This morning The Hobbitses headed off for San Diego - I don't know why - but will return later for a day or so. There's so many great place in L.A. to take them, I don't have time to even scratch the surface. But for today, I'm limpy and chafey - the Mouse got his pound of flesh. I'm ready to sit down and not get up for a while.