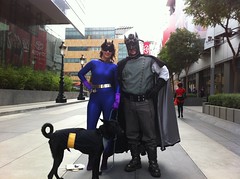 chumley, Blink and I helped set the world's record for most people dressed as Superheroes in one place.

It was a publicity stunt for the new Will Ferrel animated movie "Megamind" but that was barely in evidence. Mostly it was 1500+ folks done up like superheroes!

The biggest hit of the day was Bat-Dog, who almost didn't make it in because they said no pets. Eventually we convinced them that he was incognito, and couldn't properly be recognized as a pet. Spurious logic, but they got tired of arguing with us, so let us in.

Kids mobbed Blink, and about a zillion people wanted a picture with him. He's a rockstar, that dog! Steampunk Bat-Gentleman wasn't too shabby though, and Green Lantern, Wolverine and Bat-Girl were all well received. And all before noon.