The Glorious 12th of August 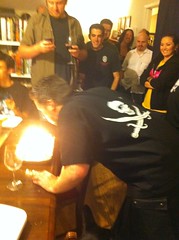 While August 13th is International Left Handed Day, the Glorious 12th of August is ...okay a very obscure Scottish holiday (first day of Grouse Shooting Season) but also my birthday.

In childhood my birthday were often fraught with strange and tense drama - to the point of being outright canceled, right along with returned gifts and all. As a result, I kind of had a complex about it, and so was a touch uncomfortable with a big celebration. But

pyr8queen wanted to do a dinner thing, and then there were people who felt left out, so it turned into a party thing ... and spiralled into kind of a big thing. i was super stressed out, ostensibly for getting all the food ready. But I like cooking, and I made stuff that was right in my wheelhouse, so ...mostly it was just me being neurotic.

All was forgotten once friends started showing up. Okay, i'm still not happy with the way the smoked salmon turned out, but it was tolerable. And, we finally tried haggis. 39 years, and i finally try haggis - why did I wait so long? I need to get busy with those things I've always wanted to do but never got around to...why wait? Anyway. Haggis - it's nowhere near as bad as its fearsome reputation. Mostly it's like hot liverwurst, mixed with a bit of barley. A little mustard and it was downright delectable. Ok, maybe not delectable. But certainly tolerable.

The came a point when I was expected to open gifts, and it made me very uncomfortable. Maybe that

daogre was videotaping the whole thing added to it. But unpacking the experience later, I realized that it was one of the few occasions when I was receiving a gift that I hadn't reciprocated. At Christmas, we all exchange gifts, and so it doesn't feel selfish. But this was weird and I felt really strange. On the other hand, I'm going to Blizzcon, I got a battle-axe, a stock pot and a meat cleaver, plus there was cake. I will put up with discomfort anytime if it means I get a battle-axe.

It turned into a great party. I'm so flattered (to the point of above-mentioned discomfort) at how many people showed up. Our late-night trek did not result in seeing any of the perseids, due to cloud cover - but the dogs had fun tearing around the beach and it managed to tire them and Herself out sufficiently to be worth it. (Always a difficult endeavor in both cases.) There was also random naked Japanese people, and the nega-Blink ... a pure white dog with a curly tail and big ears.

So I'm 39, but family and friends take the sting out. Plus I've now tasted and haggis, and I have a battle-axe.