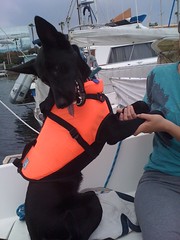 This is our new dog, Queen Mab. Really just Mab, the only thing she's the queen of is the many eviscerated dog toys that she's torn the guts out of. The screaming monkeys that Blink loves so much? They've been torn down to their constituent parts, leaving a trail of tiny stuffed monkey limbs all over the house.

We thought Mab was Blink's sister - the blurry picture that was on the animal shelter's website looked very much like him. It wasn't a no-kill shelter, so we were worried about her fate. We found out that another couple was going to adopt her, but when they cancelled, we went up to Azusa to meet her and see if she was really Blink's littermate. When the two dogs met they immediately started playing together. But it was clear they weren't related - just very similar looking.

We asked the attendant what would happen to her if we didn't take her home. It turned out she was way overdue for being put down, and she was going to be euthanized the next morning. Who could leave her to that horrible fate? So we took her home where she'll get love, care and discipline until we find her a permanent home. She's super playful and has a lot of energy - but she's really good with the cats, very friendly with people and basically harmless with dogs. She hasn't been socialized so she doesn't really get all the rules of dog politics, but she just expresses it with lots and lots (and lots and lots) of playing.

So we took her sailing yesterday for the first time. She loves swimming (but isn't very good at it!) so we figured she'd be a natural on the boat. Nope! She didn't like the boat! She hunkered in the cockpit and whined most of the time, clearly freaked out by the motion of the boat. But she didn't get seasick, she wasn't a danger or anything, so I have hopes that she'll work it out and get used to it.

Two fairly sizeable dogs on a small boat is quite a crowd, though! Mab is adorable and sweet, and if you want an incredibly cool, neat-looking dog ... well, I'd be happy if she found a home where she and Blink could visit, because they're buddies now.