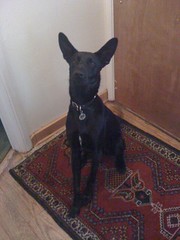 I've written before about the unadulterated joy that Blink experiences in that golden moment when he's sitting hopefully by the door and I finally hold up his leash. This indicates that it is - joy of joys! - o sheer transcendent bliss! WALKIES!

He usually hops up on two legs and paws the air and me and then the air some more to express this happiness. This morning, as he was doing his Dance of Joy, he got so excited that his hind legs went completely out from under him on the hardwood floor. He tried to twist to recover, but ended up doing a full-on, legs-completely-splayed bellyflop. It was fantastically clumsy. He landed spread-eagle like you'd made a dog-skin rug and put it on the floor.

He was largely undaunted, however. Despite being stunned for just a second when his jaw hit the floor, he hopped up and attempted to look as if nothing at all were unusual, and it was totally time to go on a walk! Sadly I missed a picture of the dog-skin rug, but I did get this one, soon after when he was attempting to look cool again.