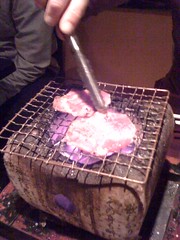 pyr8queen and I went to the big crawdaddy-boil at Uncle Darrow's Cajun Creole Eatery. It was their 10th anniversary, and to celebrate they set up the parking lot as a big mud-bug-boilin' and eating area. We took The Blink Dog with us, and got a big box full of crawdads, potato and corn. It was delicious...though still a little unsettling. Custom dictates you pinch off the head of the crayfish (crawfish, crawdad, mudbug...all the same thing) and suck on the head. Then you pinch the tail and peel out the meat. Often the critter's guts have gelled into a yellowish paste called "the mustard" which is gritty but not un-tasty. It ends up being quite a bit of work, but it's all worth it, as crawfish is like tiny creole lobster.

That night we went out to see Guy Ritchie's Victorian reboot of the James Bond franchise, strangely called "Sherlock Holmes". It was enjoyable but a little weird, being Guy Ritchie-ish in ways that are great when you've got drugs and rock-and-roll, but weird when it's just Victorian dissipation and tea.

Afterwards we goofed around on the Promenade and did a little shopping, then had dinner at what's become one of my favorite places, "Musha" on 4th and Wilshire. It's an izikaya style restaurant, meaning it's Japanese home-style. Which pretty much means they make whatever the cook is feeling like, with the hand-lettered and engagingly funny engrish menu to match. It's sort of tapas-style, so we shared salmon sashimi, lobster roll, and an "omelet" made of noodles, squid, bonito sauce, egg, mushrooms and various other flavors...all grilled up like a big messy pancake. That was truly superb, and rightly is the house specialty. Lastly we had beef cow's tongue grilled over an open tiny grill - seen in this picture. It's sliced thin, and with a little lemon, soy sauce and wasabi it was quite tender and delicious. Originally I ordered just regular steak, but having watched quite a bit of Anthony Bourdain's "No Reservations" I thought something closer to his favorite (hooves and snouts) would be more adventurous and memorable. And it was!