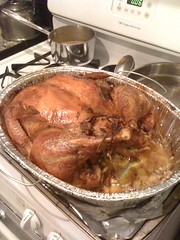 Well, here it is.

I saved myself some trouble, and ordered the birds already boned from Whole Foods. (And haven't we all been boned by Whole Foods?) I picked them up Thursday morning to prepare for serving Friday evening. I'd heard that Turducken tends to get very dry since it takes so long to cook the chicken in the middle, so I brined the turkey and duck overnight in a mixture of 1 cup kosher salt, 1 cup sugar per 1 gallon of water. I used an oven bag to hold them in with the brine, and put that inside the roasting pan in the kitchen. For the chicken, I full-out marinated it in a spicy marinade I invented last year - figuring the center would be a nice touch of heat.

Christmas morning I took everything out of the fridge so it would be an even room temperature for cooking. Then we had the gravlax (salt-cured dill salmon) I'd made a few days before and opened some presents. After that, it was time to get the birds going. I started by making a cornbread-and-thyme stuffing. Then I lined the inside of the turkey with bacon, then a layer of stuffing. I made the stuffing especially moist since I wanted it to help keep the birds from getting dry. Then came the duck inside the turkey, and then another layer of bacon and stuffing, and then the marinated chicken. I used a few pins and some twine to roll it all up and sew it shut, so it had a traditional turkey shape.

All that went into the pan, and I put it in the oven at 450 for 20 minutes, then lowered it to 325. After the turkey had a nice brown color, I covered it in tin foil. Unfortunately, I discovered that my meat thermometer wasn't working. I wanted to cook it till the chicken was 155 degrees, but couldn't tell when that was.

pyr8queen's mom brought one over at dinner time, but by then it was past time to take the turducken out. So in the end, it was a little more dry than it should have been.

Also, about halfway through, I saw that the fat from the duck and bacon had cooked out and the whole bird was basically swimming in juices. I mean, it was right up to the edge of the roasting pan. So I ladeled that out until there was just some juice at the bottom, and separated out the fat from the set-aside portion to make gravy. I took about two cups of the jus, and added flour over heat in a pan on the stove. It thickened up quite a bit, so once I'd gotten it to just the point where lumps were forming, I added hot water again until it thinned out to gravy consistency. Normally one would add salt and seasonings at this point, but the jus was so savory from the brine, bacon and stuffing, it was completely unnecessary. The gravy was absolutely amazing, and by far the best part of the experience.

I let it rest for a while, the better part of an hour, to reabsorb the juices left in the pan. Carving it up is very easy - I just separated out the wings and legs and then cut it up like meatloaf. It didn't come out in discrete slices, it was very tender and shredded easily. In all, it was still quite good, but I do wish I'd taken it out earlier. Clearly a working meat thermometer is critical to this recipe.

Given the cost and fuss, I'm not anxious to do this again - though naturally if anyone else were to want to cook one I'd be glad to help! We have quite a bit of leftovers, so I'm thinking of creative things to do with it - like maybe turducken curry!