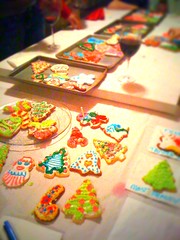 For some reason, all pictures must now be taken with the tilt-shift effect applied. This is a rule that

pyr8queen was quite adamant about, but I'm not sure how important it is for cookies. Never the less, here we are with tilt-shifted cookies from the advent party last night. Christmas is seriously important in the Nyby cult. It's kind of like some sort of Greek Mystery Cult, but instead of it venerating Mithras, it's Santa Claus. Hmm, maybe Santa IS Mithras - no one's ever seen them in the same room together!

So we're hosting Christmas dinner. For a while I toyed with ideas of making venison or pheasant, or something exotic. I mean, I love turkey, I want to make a turkey, that was my dream. But I was told quite sternly we'd all had enough turkey at Thanksgiving, and so Turkey was RIGHT OUT.

And then it came to me. I had an idea. An awful idea. A wonderful, awful, idea. Turducken! A chicken, stuffed inside a duck, stuffed inside a turkey! I get my turkey, I get my exotic, and I get my excess. I love excess, especially when it comes to food. In fact, that's part of why this will be my last bit of excess for a long time.

My extensive (google) research suggests turducken can end up quite dry - so i'm going to employ my patented brining method for the turkey and duck - and i will use my own marinade for the chicken, one of the three I invented last Fall. Between each layer, cornbread stuffing which will take the savory bits from the duck fat very nicely...but still. Needs something... bacon! Yes, I will line the inside of the turkey with bacon. So from outside in it goes turkey, bacon, cornbread stuffing, duck, cornbread stuffing, marinated chicken. In addition there will be cilantro pickled shrimp for starters (and gravlax for breakfast), on the side my grandma's secret gravy, spaetzle (compliments of the Cult of Christmas), brussels sprouts with pancetta and pine nuts, and gingerbread martinis. For dessert, Herself is making cheesecake.

...and after that, I have to lose the 44 lbs I gained since I moved here five years ago. Yes, it was five years and one day ago, and I arrived her at a healthy (and perhaps generous) 200lbs. At a pound a week, I expect it will take most of a year. That's going to be a year! A year! So I need to focus on healthy changes that are sustainable rather than something nutty - supplemented by a return to my pre-injury healthy exercise habits. I always did best when I was training for some particular goal rather than just trying to get exercise for no reason other than general fitness. Plus things that are fun and engaging, like surfing and Aikido.

But until then... excess!