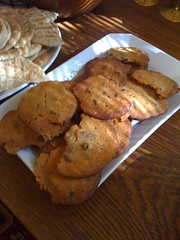 The Hobbit's whole family are very close. Fifteen years ago his grandfather died, and just as he came to my mother's funeral, I came to his grandfather's funeral. For all these years his grandmother lived alone, active and lively. She made frequent gifts of cookies to The Hobbit, tiny morsels of baked perfection that he brought to game nights and we lovingly called "crackies" because it was impossible to have just one. (Though for the record, once I did have just one, expressly to prove it was possible.)

Sadly his grandmother passed away last week, at 93. So at the house-warming party on Sunday, I did my best to re-create crackies in her memory. I think the recipe was fairly spot-on (light brown sugar makes for a butterscotchy taste that is very nice, and a liquid batter makes for a thin, crispy cookie.) but the size was out of scale. I don't know how she got them so tiny - I used less than a tablespoon per cookie, and still they were three times the size of her cookies.

The house-warming was a hectic affair - we were literally just putting the last few things away when the first guests arrived. Our new house, now that it is furnished, doesn't hold as many people we had thought it would - but even so family, friends and pets came out to carve pumpkins and have a good time.

It definitely feels like a home. Especially with crackies a-bakin'.