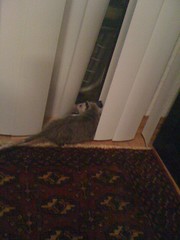 What follows was pretty much hilarious. My cat is useless at this sort of thing, back in Manayunk possums wandering in wasn't entirely uncommon. She would sit and watch it eat out of her bowl, and occasionally look at me as if to say, "So. Are you going to do something about this?" So

pyr8queen decided, much as in the Mothra attack, this was a fine opportunity to put her cat, Dummy to use. And, much as in Dummy vs. Mothra, Dummy was utterly uninterested. Dummy refused to even LOOK at the possum, instead preferring to play with a catnip-laced toy a few inches from the possum's tail.

So then we decided we need a "long pokey stick" to dislodge the possum from where it was hiding behind the Cabinet of Curiosities. My part of the job would be to take a picture. The "long pokey stick" was, as it turns out, a boffer halberd from the LARP we play in. This, I am told, made the whole incident "epic".

At any rate, the cats were unruffled, the possum left, the pokey stick worked, and I got this picture.