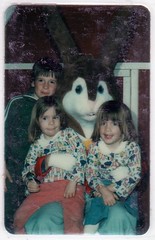 Until a certain age, my sisters and i got our pictures taken with the Easter Bunny ever year. Santa Claus not so much, one of my sisters was kind of scared of Santa. Looked too much like a clown, I guess.

S'anyway we'd troop down to the King of Prussia plaza. In the center court, which is now off in a corner near Sears and Macy's (at least that's what was there last time I was there) but at the time was smack in the middle -there'd be this little white lattice house in which would sit this gigantic anthropomorphic rabbit. We'd file in and sit on the rabbit's lap and take a picture.

Think for just a second how demented that is. If you didn't grow up in the U.S., a yearly rite of going to a shopping center to get your picture taken with a gigantic rabbit would seem completely deranged. We accepted it as perfectly ordinary, as you can see from this picture.

There were other Easter tradition. We dyed eggs every year too. And while we would use various combinations of dyes and crayons and other effects to make pretty eggs, there was, year after year, a picture of me with two eggs of various colors with big dots in the middle holding them up like gigantic 'toon eyes. That joke never got old. Wish I still had some of those pictures!

We also had Cadbury Cream Eggs every year. There was an ongoing debate about the correct way to eat such an egg. I would bite the top off the narrower end and suck out as much of the cream (or is that creme?) as I could. Then bite a little more chocolate off, then lick out some more cream/creme - eventually there'd be no more filling, and I'd eat the chocolate. Alison was more of the break it in half along its horizontal axis school.

Lydia, however, would pound 'em down in one gigantic gulp. I remember the first time this happened, and the utterly shocked expression on Alison's face and mine. Meanwhile Lydia filled her cheeks like unto a chipmunk's (or a huge demented rabbit) and ate that egg. Eventually she realized we were staring at her, and she looked back at us like, "What? It's good!"

And they are, too.