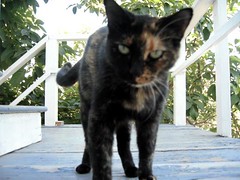 Last night, I witnessed a battle for the ages. Dummy, seen here and looking very fierce, scampered at top speed from on top of the closet, across my butt (where normally she is given to sit and nestle up for a while) bounded across the loft, and leaped down on the floor.

pyr8queen observed that she had something in her mouth that looked like a feather. Which turned out to be a moth of gargantuan size. I mean, it was easily the size of a hummingbird. Unfortunately, despite having the tactical upper hand, Dummy just let Mothra go. We can only wonder why she did this, surely it will be a question for the ages - but let it go she did. This freaked

pyr8queen out something fierce, who leaped up on a chair. Mothra could fly, but...well, something are best left unquestioned.

Mothra proceeded to bat around the apartment, its enormous wings blotting out the light. Dummy perched on the floor, very curious about this crazy flying thing.

pyr8queen stood on the chair. Eventually Mothra flew up into a lamp cover and stayed here.

pyr8queen muttered something about needing a "long pokey thing" and retrieved a bbq skewer. She poked at Mothra, but Mothra resisted being dislodged. She then picked up Dummy, and held her up to the cieling lamp while poking at Mothra with the skewer. I remain uncertain what she imagined would happen, but what did happen was the moth just flew out and renewed its circuits, and Dummy made no effort to capture it.

Eventually Mothra landed on something enough for

pyr8queen to give it a good schwack with a notebook, and it flitted under the refrigerator. At which point

pyr8queen again took up the pokey stick in one hand, and Dummy in the other, and fished out Mothra. This took a while, and she found some other stuff too, and had to retrieve a flashlight. Eventually Mothra decided the flashlight was fascinating, and fluttered up to it, and stood, staring into its light, entranced like a Republican staring into Karl Rove's eyes.

I believe the plan was that Dummy would make the kill, at last. Dummy, instead, lost interest and tried to wander off.

pyr8queen dropped Dummy directly in front of Mothra, and told her what to do. She does that a lot, pointing Dummy at something and telling her what to do. Thus far, it has never worked, though i suppose

pyr8queen lives in hope that someday, Dummy's English skills will improve, or she'll become more biddable, or will cease being, essentially, a cat. In this case, however, no matter how she cajoled or commanded, Dummy just found something else somewhere much more interesting.

Released at last from duty, Dummy scampered off. Mothra resumed flying around the apartment until, finally despairing of teaching her cat how to hunt (or fetch raven eggs from nests)

pyr8queen gave Mothra one final schwack with the notebook, shuffling it off this mortal coil forever. Or maybe it was merely stunned - it was of a sufficient girth that I wouldn't be surprised if it eventually fluttered off to darken the sun elsewhere. She deposited Mothra outside, and Dummy acted as if nothing had happened at all.

It should be noted that my cat was utterly disinterested in the entire proceedings, epic nature of the battle notwithstanding.