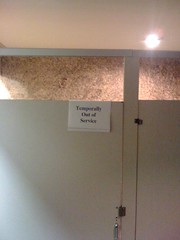 I think this sign (found at Strategicon last weekend) says best why I haven't been posting much. I'm temporally out of order! The only way I can post from work is via the flickr "blog this" interface. Then when I get home, I'm generally in recovery mode, rather than energy mode.

Maybe I should have gotten into that allegedly broken bathroom stall, thus gaining the powers of a Time Lord and being much better able to manage my time to the satisfaction of employer, family, friends, and

I fear if I did so, however, my newfound tardis would be forever stuck in toilet stall mode, making it a retardis, basically. Also causing any number of gross mishaps when arriving in a new location. "Egads man, don't poop there, that's the fusion battery!" Coming soon to the BBC, "Dr. Loo"!