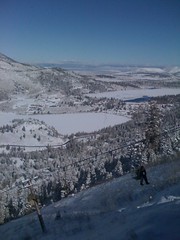 So, skiing with two bum feet turned out to be a bad idea. Maybe the boots were too tight, maybe my legs aren't strong enough - but after much preparation, acquiring equipment, packing, driving, and various arrangements - my first shot down a ski slope in a long time was utterly disastrous. Each turn was agonizing, and each successive turn added incrementally to the existing pain. I've got a fairly high tolerance for pain, but this was more than I could take. I ended up sitting most of the weekend out, and just enjoying the view and reading a couple of good books.

Crisp mountain air, soaring heights, driving snow - it was all very beautiful. On the way home we found a natural hot-spring on a tiny off-road track that a sort of shady character at the lodge described to us. It literally involved going down a cow path way out of sight of the road, and then hiking down an icy path. As predicted, there were naked people, too. The water was not especially hot, and so my dream of being an arctic snow monkey was unrealized. I could have taken it about ten degrees hotter, and substantially less muddy.

The voyage home involved mud in uncomfortable places, an amazing sandwich at Schatt's Bakery, and some astounding revalations about Death Valley.