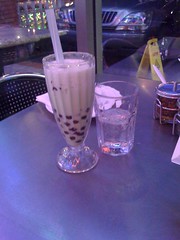 Okay, not all people. Maybe just people trying to buy things on craigslist (and not even all of them). Last night I sold my old TV - one good hearted fellow immediately offered to paypal me the money and $50 extra to drop it off, so I did, and stopped for thai food on the way home. Where I had this green boba, which was flavor "green". No seriously. And that's about how it tasted, too.

But I've gotten a lot of responses to the TV ad. In the original ad I included its size, name, model number, age, functioning status, and inputs. I included the manufacturer's specs, too, and said where I live and where I'd be willing to deliver, for an extra charge.

Almost every single person that responded to the ad, and there are dozens, has done one of two things - either asked a question already answered in the original ad, "Does it work?" (no, doofus, I'm selling a broken TV). "Does it work as a TV?" (No, doofus, I'm calling it a TV because it's a transvestite.) "Will it work for me?" (This is an existential question I can't really address) "How big is it?" (The ad's title is 32" Tv. That's a hint.) "Does it work as a monitor?" (Did you notice how i said it had a VGA/RGB input, and that I'd used it as a monitor myself?) - a dozen other stupid questions.

The other thing people did was try and lowball me. I guess that's a craigslist tradition? Does the $20 lower you offered really matter that much to you - so much so that I just deleted your email? And really, did you think I'd have so much trouble selling a good, HDTV that I'd let it for half my asking price (which was a 1/4 its original price?)

And still, the hits keep coming in! I think I'm going to start responding to craigslist ads with totally bizarre and unrelated questions. That should be entertaining. Maybe I'll post some here.