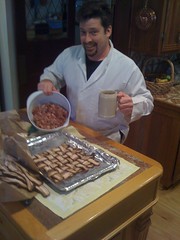 This weekend was the bacon explosion. Ok, technically it was the superbowl, but that was more like a thin excuse to make unhealthy foods that are delicious than a game I particularly cared about. So, into the kitchen I went to make "The Bacon Explosion" - much storied on the internet recently.


I got two pounds of Black Forest Bacon from Wholefoods, and two pounds of fresh ground sausage. I also picked up some wings and sauce, which turned out to be a happy afterthought.

Step one was to create the bacon weave, or, with a labcoat as seen in t his picture, the "reticulated bacon matrix". The recipe called for 5x5, but I found 7x7 made a better square and fit exactly. The black edges of the Black Forest bacon made a nice aesthetic touch, too.

Next, the Reticulated Bacon Matrix (RBM) was rubbed with BBQ dry rub, and covered with two pounds of decased sausage that

daogre and I had prepared. Status - thumbs up!

This was then slathered with BBQ sauce - I combined a hot and spicy honey-based sauce with a bit of hickory-brown sugar sauce to cool it a bit. Then on top of that went the remaining bacon, cooked and crumbled. This, for some reason, made

The final step was to roll up the sausage into a neat log, and then roll the RBM (reticulated bacon matrix) around the NSL (neat sausage log). Lastly, powder that with the BBQ rub, and into the oven it goes.

I'd have liked to smoke it (that's what she said!), but don't have a smoker. So instead I put a meat thermometer in and put it in the oven at 225. When it got to 160F, I took it out, basted it with one last layer of BBQ sauce (a new batch that hadn't touched the raw sausage - if we're doing to die of this, it will be a death of joy, not poison.) - and served it with Pillsbury Grand's biscuits.

As an aside, I cooked the wings in the bacon grease. I had no idea if it would work or not, but once they got nice and crispy I tossed them in some Buffalo wing sauce, and it was absolutely delicious. Best idea ever, and a happy accident that turned out brilliant. I have the meatfinger!

The BacExplo itself was very tender, and had a red smoke ring around the outside because it was slow-cooked. It tended to fall apart more than I expected, but also didn't reduce in size anywhere near as much I'd expected- slow cooking meant that the juices (i.e. the fat!) didn't melt off, but rather stayed succulently fatty and amazing.

Still, my thought is - too much sausage. It's the Bacon Explosion, after all, and the primary flavor was sausage. I will probably make this again, using two RBM's, rather than one, and maybe a third less sausage at least - but I won't be doing it anytime soon, as I am thoroughly bacon explo-overloaded.