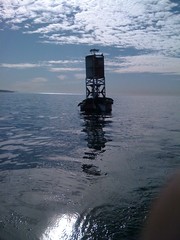 Reading the headlines this morning, I see some news that makes my heart soar, and renews my pride in my country. Your director of intelligence, Dennis Blair ordered an end to torture of detainees, saying, ""Torture is not moral, legal or effective". It's appalling that it's necessary that this even be said, but at last a long nightmare of an irrational slide into evil is ended. What's more, you've already signed orders to halt proceedings and close Guantanmo Bay all together, and ordered all Federal Agencies to react to FOIA requests in a spirit of disclosure and transparency.

In short, you make this Civil Liberties liberal's heart sing new (and very funky) songs of joy. And maybe even cry a little. (But in a very dignified way, like that Indian dude in the anti-pollution commercial.)

But what about Sea-lion stink, Mr. President? What will you do about that? Where's your executive order on that? Allow me to explain. I went sailing last weekend, which as a rich white guy is one of my constitutional rights guaranteed by your predecessor. Out on the water, we came upon a buoy, covered in lounging Sea-lions. What were these hazards-to-navigation doing out there? We hove close to find out, and discovered that their stench is appalling! Even more appalling than Bush Administration Executive Orders! Do you have any idea how much Sea-lions stink, Mr. President?

This is obviously a very pressing issue, and I hope that you will turn your attention to it immediately. How am I supposed to enjoy the sparkling blue waters of the Pacific, the endless vault of the blue sky, and nicest-day-of-summer-in-January warmth of our unseasonably hot weather when these corpulent, lazy stinkpots are out there, stenching it up.

You've done a fine job at clearing out the lingering stench of the other corpulent lazy stinkpots that have polluted America for far too long - what are you going to do about the Sea-lions, Mr. President? Huh?