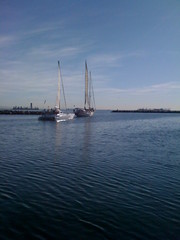 pyr8queen's family set sail on a big adventure - around the South Pacific in a grand circuit, with Pilot (the first boat) not due back nearly a year, and Ita' 'Pea 'Pea (the catamaran) not for two years.

There were quite a few assorted dock-dwellers and friends-of-family around to see them off, though nothing to compare with the blowout dock party the day before. They'd been preparing for a very long time, so with a tiny shore breeze blowing in anticipation of a Santa Ana later, and with no fanfare, they cast off and were under way.

pyr8queen isn't very happy about their departure, and is staying in the family home while they're gone. Soon enough, though, it'll be our turn!