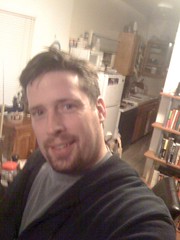 Finally did it. After talking to the stylist at 'Floyd's Barbershop' I knew I just wanted it gone. I did save my pony tail to give to

pyr8queen - who was pretty confused when I appeared in the apartment with my scooter helmet still on, and handed her what appeared to be an eviscerated squirrel.

I feel like myself again. Despite getting advice from a Big Shot Rock Star and a gay man to keep it long, I just feel more natural with it short, cowlicks and all. I showed the stylist a picture of the guy from "Madmen" to show her what kind of style I wanted. Then I went home and watched the BSG webisodes - only to find

pyr8queen and my cat sitting on my lap as soon as I sat down.

That's right - even the Don Draper haircut will get you covered in pussy.