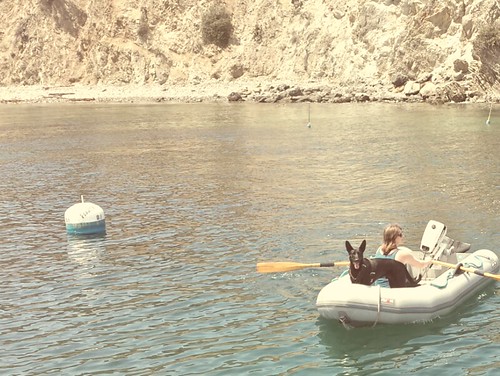 We went to Catalina last weekend. The passage over on Friday night was my first night-sail. It was rough-going, I was exhausted; having gotten out of bed at 4:30AM that morning, and both P and her sister were sea-sick. They took dramamine and passed out, leaving D and I to steer the boat. Even Blink, normally blase about sailing, got a little sea-sick and barfed, a first for him. Once we got out of the worst of the pitching rough seas, and into the lee of Catalina, it was pleasant going, with a dramatic full moon impossibly large, looming over the horizon like a sumo wrestler lowering himself into a bath.

I steered the last couple of klicks while D readied for mooring. We had a hard time getting the ladies up to help out, and as a result the actual process of mooring was a bit of a fiasco. Fortunately the cove was almost empty, and we managed it, finally.

The weekend itself was a pleasure - I got in two dives, one at Lion's Head point and the other at The Dark Spot. We managed to see some interesting sea-creatures, and when we surfaced in Cherry Cove, there was P, her sister, and Blink all riding the same stand-up paddleboard, somehow.

The return home was less eventful, but I was grateful to be in my own bed at night. Poor Blink was so exhausted by the weekend that we couldn't rouse him out of bed Monday morning, and he slept until 2:30 in the afternoon.

We're trying to get all the little things done that will be hard to manage, once the baby comes, which shouldn't be for another four weeks, but one never knows.