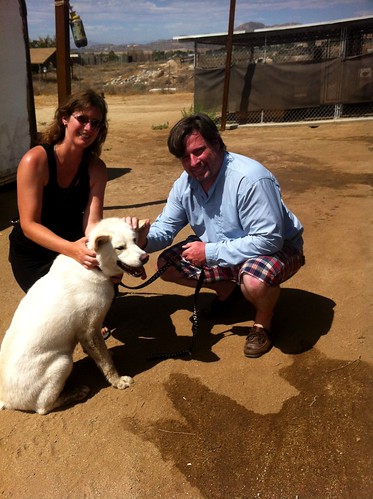 After his ten days in quarantine, we picked up Beowulf from the West LA Animal Shelter. Unsurprisingly, he did not have rabies. I had checked in on him almost every day, though they hadn't let me see him. I was concerned when they said he wasn't very interested in food, but one look at him made it clear he had become re-interested.

He was well cared-for, and quite chubby from his time with no exercise. But he was clean, in good health, and obviously very happy to see us.

We packed him into the car, and drove out to "Passion For Paws" a rescue shelter that specializes in Akitas. They're way out in the high desert, near Hemet, an unlovely place baked by the sun. They had a large compound with a couple of doggie playgrounds, and kennels all around with Akitas obviously in good health.

When I walked him into the play pen, he leapt and cavorted around with great abandon, running in a circle in the wading pool there, chasing me and not-quite-fetching the toy I threw for him. He was in high spirits.

We told his story to the caretakers, who were appropriately cautious about him biting. Then we walked him over to his kennel, a large shaded enclosure with a dog-house, a padded bed, and plenty of room. When we closed the door and he was on the other side, he started to paw at us through the fencing and cry.

I made it that far, at least, without getting choked up. But I couldn't help shedding a manly tear or two, like a cowboy.

Okay, maybe I was broken hearted and very upset. I know this is best for him, that he'll be placed with a professional trainer until he's relaxed and secure and no longer a danger. And then he'll either be placed with a family, or returned to the shelter, but whatever the case - they won't give up on him, and they will take care of him.

It still hurt to shut the gate and drive away, and I still miss him.