The day dawned gray and Englishy, like some sort of gray day in England. 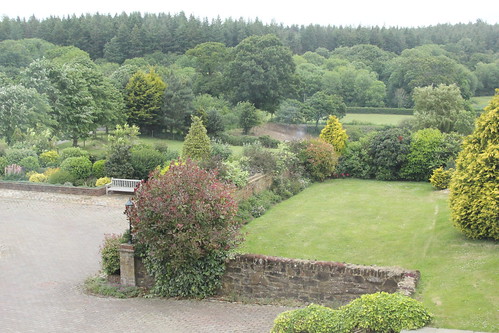 This was the first day since leaving Los Angeles that we would stay in the same place for two days. I was very much looking forward to it. The whirlwind tour of Ireland and the UK was a delight, but also exhausting, and my dogs were barking. So when our hosts suggested we start the day with a rambling tour of the 700 acre farm and deer park, I was reluctant..until they showed us the 4x4 they roll around in. Then I was all "Oh yeah, that's how to do it." It's the 21st Century equivalent of taking the horses for a canter.

You know how you have this sort of idealized impression of the English countryside, half-formed from various sources like Downton Abbey, All Creatures Great and Small, everything Jane Austen ever wrote, and so forth? And you know how various medieval shows either try and make everything seem sparkling clean in a way that isn't believable for a medieval world, or they go the opposite extreme and make everything filthy and wretched? Well after spending the day rambling the English countryside, I feel like Jane Austen was right, it's all beautiful and sparkling and elegant.

We got the grand tour from our hosts, Peter and Alison, who are very involved with the management of their land. Alison even went to agricultural college after they bought the place, and Peter views it as his duty to be an involved steward of the land. He explained in great detail the interdependence of the wildlife there with the management of every aspect by humans. 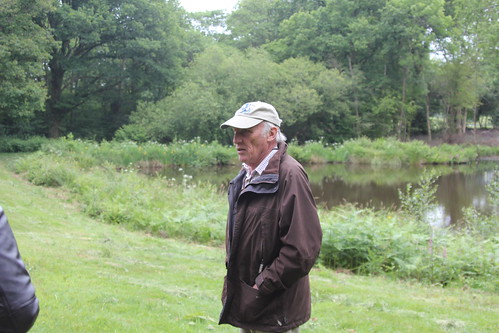 I learned that foxes aren't cute if you're trying to raise chickens, that magpies aren't cute if you like any other kind of bird at all, and that hunting has become a vital part of population management for animals, and forestry crucial for healthy forests. We rambled all over the estate, pulling up to a gate, opening it and driving through, then closing it behind us. We saw an injured pheasant that tried rather unsuccessfully to hide. 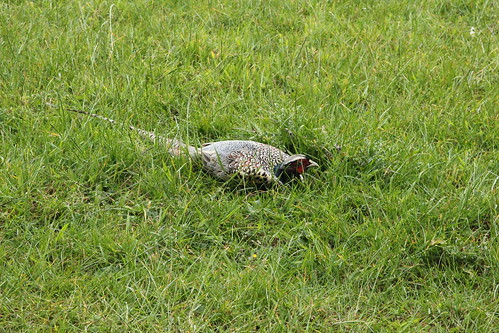 If you look carefully, there's a red deer in this picture. The estate, "New Park" was named because it was the second of two deer parks on an older, noble estate where only the lord of the manor could hunt deer, and kept large preserves on which to do so. 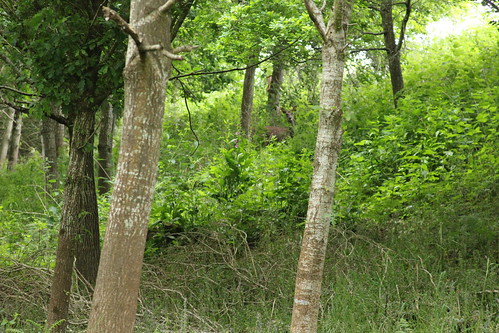 We investigated badger workings, stopped for sweeping views on tall hills, and generally had a beautiful time learning a great deal from two people really passionate about their land. 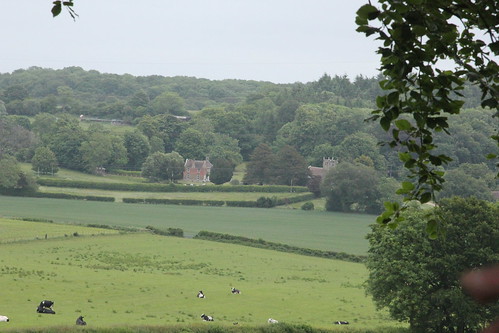 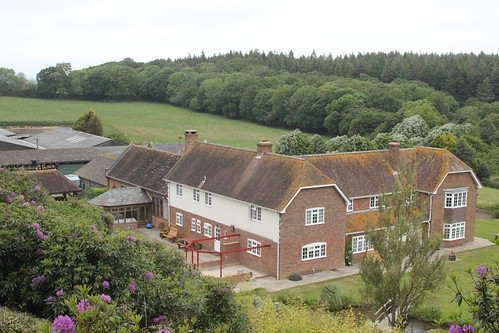 We repaired to the house for a nice lunch, tea and beer. I mean, not together. Alison cooks on an aga, something I'd never seen before. It's basically a stove that is always hot, and lightning hot at that. Imagine that you put your furnace in your kitchen, and then put a couple of ovens in it, and a range top. That's an aga. It boils water in seconds, and is generally running at something like 700F, which is astonishing. It's reasonable in the cool climes of rural England. Here in Southern California it would be insane, and more's the pity.

After a relaxing lunch and long chat with the very voluble Peter, we also headed off to Corfe Castle. Corfe has been around for over a thousand years, and has been an important piece of military architecture ...until Oliver Cromwell decided he'd had enough, and blew it to pieces like Godzilla blowing out candles on a birthday cake. 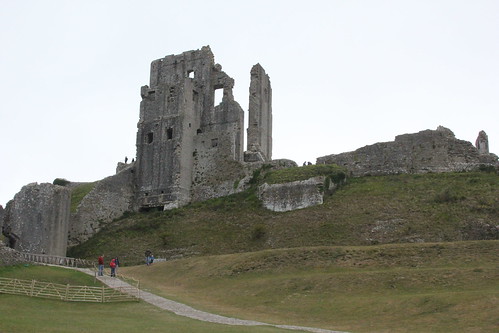 We tried to take some more bookjacket photos, but it was extremely windy, and we never quite managed it, but clambering around the castle was interesting and fun. 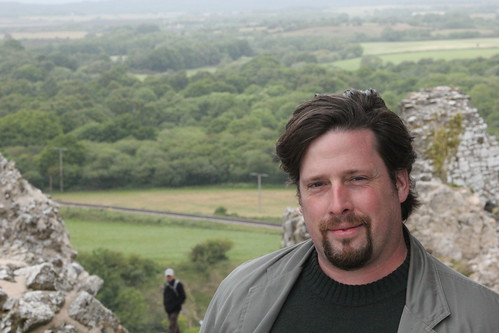 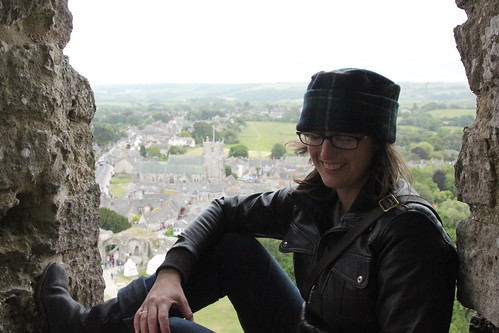 There was also an old steam engine train that ran through the nearby town, which made for quite a picturesque scene. 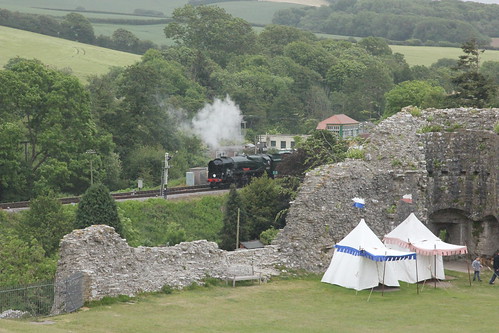 After exploring the castle and the nearby town, we returned to New Park to rest for a while, and then get ready for dinner at the Royal Motor Yacht Club in Poole Harbour. Hanging on the wall was one of the club's foremost members - the very same Duke of Edinburgh who had stranded us on a traffic isle in Dublin while he and the Queen passed by. His Grace did not join us for dinner, which was a shame because I had a charcuterie plate of Serrano Ham as a starter, and pan seared duck breast for mains. It was fancy and delicious, and afterwards we watched the sunset over the harbour before returning to New Park.

I sat in the kitchen for a while chatting with Peter, who is a fascinating guy and has that English talent for agreeably disagreeing - making clear that his contention is with the issue, and not the man. I wish more people here had mastered that skill, as it allows for vigorous but enjoyable discussion of otherwise divisive issues.

For the first time, we went to sleep the same place we woke up!
Collapse