May 27th, 2011
We woke at the Piries and had a buffet cooked breakfast. Sadly this would did not include haggis, I don't think. Something that morning had me full of some kind of beans though, because I wrote in my little field journal:
"Went ashore. Received VC.
Breakfast at Piries."

If you're a history nerd that's rather droll, albeit wildly hyperbolic. Well, except for the breakfast, that I really did have. In fact, this was to be me very last proper cooked breakfast in the UK, though I didn't know it at the time. I have waxed nostalgic here about these wonderful breakfasts, and not without good reason. A good hearty breakfast is a joy throughout the day, and while I love an American style plate of bacon and eggs with toast, juice, coffee and potatoes, the UK cooked breakfast is also a thing of beauty. Fried tomato and mushrooms, egg, toast fried bread or crumpet, swhite and black pudding, possibly haggis (in Scotland), ham or bacon. Bacon! Bacon which is not streaky bacon like here in America, but more akin to Canadian style back-bacon. Here our bacon is belly bacon, which is fatty and delicious and I must say my favorite - but back bacon is healthier and yet still pleasantly salty and succulent. Breakfast in the UK is a wonderful thing.

After breakfast, we had a short day before we were due to fly out from Edinburgh to Gatwick to visit some friends of the Nybys. Their home is near Poole, England, and when making our initial travel plans we expected to take a train from London to Poole for the visit. There was some difficulty getting our schedules straight, and so Richard and Alison told us "Don't be ridiculous, our man Duncan will pick you up." As is implied in their message, they are uh...somewhat well-to-do would be an understatement. I found the prospect of being picked up by Our Man Duncan delightful, and imputed to him all sorts of powers both profound and trivial. Whenever in our journey we'd have some difficulty, I would say, "Our Man Duncan would straighten this right out!" As the journeyed continued his powers and legend grew, at least in my mind.

Anyway, we tried to go to some museums in Edinburgh, but every one we checked was closed, either for renovations or because ...I don't know, Scotland is weird about Fridays? We tried the National Gallery of Portraits and a couple others, but were either too early or they were closed.

Our last destination in Scotland before departing was Rosslyn Chapel, which has been famous amongst conspiracy theorists and grail-hunters for many years before being popularized in "The DaVinci Code." It is much smaller than I expected, and the whole thing is at present housed under a big canopy roof. Its interior is absolutely encrusted with a wealth of artistic details in stone, but age has not been kind to it. Some time in the past, an attempt at renovation was made that included sealing all the stonework in a sort of concrete crust. This turned out to be disastrous, as it was water seeping into the stone that causing the damage, and the coating sealed the moisture in and promoting the growth of mold. So this canopy was erected, which keeps the rather constant Scottish rain off the building and will allow it over several decades to finally dry out.

The chapel was created in 1446 by the St. Clair family, who have remained its sole private owners since then. There are a thousand legends about the chapel, which has remarkable architecture and interior details that are flatly amazing. Included is what appears to be a massive masonic code (which is to say, made of masonry, and maybe or maybe not also Masonic...) in the form of cubes with different facings. To date, either no one knows what they mean, or if they do, no one has come forth to explain it. There are dozens of other mysteries and stories. Among other things, the crypt beneath the sacristy was sealed a long, long time ago and has remained sealed at the family's request, despite many attempts by scholars and the government to discover what is sealed up inside it. There are many Masonic links to the chapel, and one popular theory is that the St. Clair family protected the treasure of the Knights Templar after they were suppressed and the order's treasure was spirited out of France. 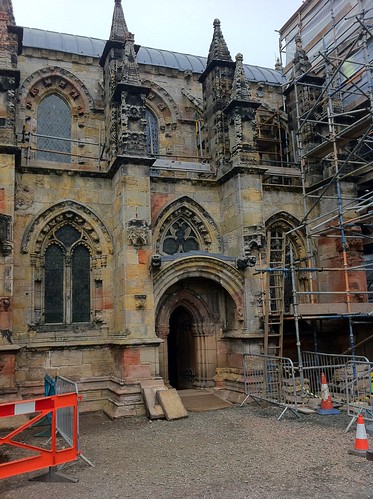 We were only able to take a couple of pictures, as the exterior is the only place where photography is permitted. The grounds were thick with not just punters, but obviously eccentric Seekers After Legends, like for instance a thick-set German with an incredibly bushy beard who had a VHS video camera set up on a tripod, into which he was muttering a low, constant stream of what I can only imagine was observations on the esoteric secrets of the chapel. 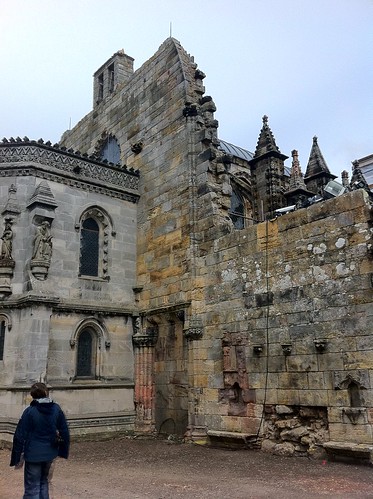 No pictures were allowed in the interior, but the tour was fascinating. Some of the more interesting mysteries to me were the many Green Men in the chapel, despite it being a Catholic church; the presence of clearly depicted maize/corn hundreds of years before it was brought back to Europe and cultivated there and well before any European had set foot in the New World, and of course - what's in the crypt? I favor the treasure-of-the-Templars theory, though the Holy Grail, the head of Jesus Christ/John the Baptist and ...just dead Scottish people.

After the tour, and picking up a candle pillar that was a replica of the Apprentice's Pillar, we found lunch in the village of Rosslyn. There was a little cozy inn called the Grail Restaurant, where we found two club chairs by the fire. I had a Bellhaven Ale and a panini of bacon and brie.

After this we returned our car at the airport in Edinburgh and readied ourselves to fly to London, Gatwick. We had by this time acquired so much scotch and other souvenirs from our visit that we had needed to acquire a backpack at a sporting goods store in Castle Douglas, which we filled with all the goods, as well as another large cardboard box. We had intended to just ship that back home, but the cost was exorbitant, almost two hundred pounds! So we lugged it along. Also at the airport I saw the only men in Scotland I actually witnessed wearing kilts, though I suspect they were vacationing Canadians or Americans.

After our fairly short flight, we landed in London, retrieved our dunnage, and were at last met by Our Man Duncan! 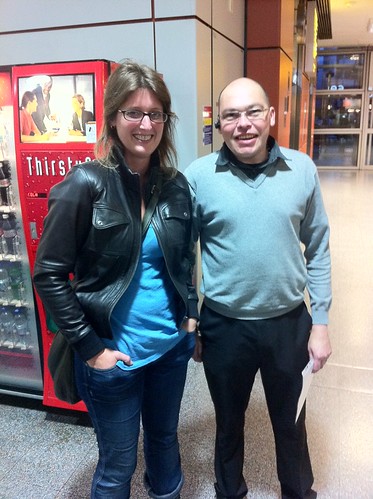 On the fairly long car ride out to Lytchett-Matravers, where Peter and Alison live, Duncan kept up an amiable stream of chatter cluing us in to various aspects of local history, culture, and his personal story. Alas, he didn't seem to have any magical powers of Making Things Happen, but he did laugh readily and well, and expressed his desire to emigrate to America and open his own business. It is a mark of how dumb our immigration policy is that despite having a business plan, money in the bank and the ability to immediately hire 12 people, he was refused. Listen up government - we were THIS close to having Our Man Duncan here in the States! 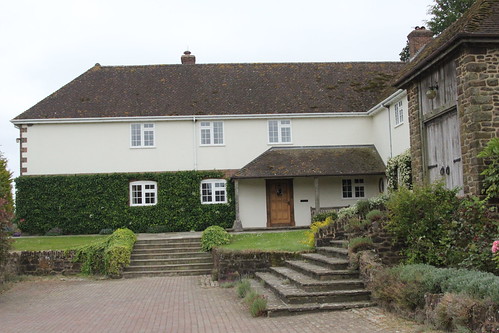 This picture not withstanding, it was pretty late at night. One thing that wrong-footed me pretty consistently, and especially in Scotland, was how late the sun was up and how early it rises in the Summer. Local sunset was at nearly 10pm and rise at just after 4AM. Anyway, we were bushed so after a drink and a little chat with our hosts, we went to bed in their guest room.
Collapse