May 24th, 2011
This day turned out, along with Ashford Castle and Peter and Alison's farm (coming soon!) to be one of my very favorite days of our trip. We started out with the ubiquitous and wonderful full cooked breakfast at Crown Hotel in Castle Douglas. Our ultimate destination was along the coast near Ayr along the rugged coast. But we weren't expected there until late in the day, so we had plenty of time to wander.

Most of the morning we spent just driving around Scottish rural roads, which range from picturesque to breath-taking. 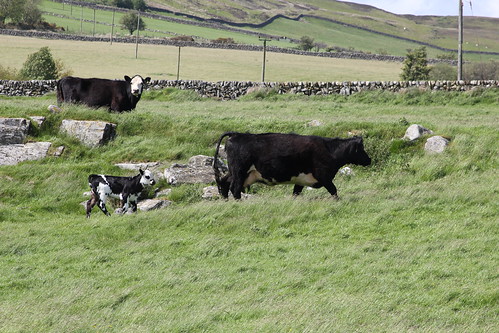 There was a particular valley that plunged abruptly from a stony height down to a green vale that was remarkable. The road we were driving wound through it dramatically, but didn't have a safe place to pull over, and so I didn't get a picture. But I recall it vividly in mind, and when I think "Scotland" that is one of the images that quickest leaps to mind.

Along the way, we got hungry for lunch, and stopped at one of the few towns along the winding country roads, a place called Dalmellington. The local pub was open but not serving food, so we walked down to the Dalmellington Coffee Shop. Which really ought to have been called something like "Aunt Edna's Living Room Where You Can Get Food." It was full of little old ladies of the littlest and oldest sort imaginable, who huddled around one of the few tables drinking tea and clucking about god-knows-what. We ordered sandwiches and sodas to go, and awkwardly stood while the proprietor slapped together two pieces of white bread, one thin slice of ham, one slice of packaged cheese, and sent us on our way. It was terrible, and it was also not cheap, but I regret it not one pence, because seeing that quaint little coffee shop and its even quainter and littler denizens was well worth the stop.

We stopped at a wool and tweed outlet in Moffat. I've always wanted a real Harris Tweed jacket. I should stop and say - I love Scotland. When I was a wee laddie, I read everything I could about Scottish history. I traced my family roots back to Clan MacPherson, and sometime around age 14 or so, wrote away to the clan organization and asked if I could be a member. This was in pre-internet days, so it was a bit of effort, and entailed months of waiting. When I received my official Clan MacPherson membership card, I was proud as punch and carried it in my wallet until my wallet was stolen out of the back room of a restaurant I worked for in college. But the cost of genuine Scottish wool, and particularly Harris tweed, is a bit prohibitive, especially given the exchange rate. So here at the factory outlet, I found a great genuine Harris tweed coat, as well as some MacPherson tartans for family members at home. Real Harris tweed has a very peculiar provenance that involves secretively dropping bags of wool at the residences of authorized weavers without every interacting with them. Why? 'Cause Scotland, that's why. All told, we spent quite a while and a large chunk of coin getting fine woolen goods.

Armed with a fine tweed jacket, and an equally fine pipe acquired in Dublin I felt a proper gentleman when we set out. And our reception at Culzean Castle (pronounced kuhl-AYN) certainly continued to foster that happy delusion. Never mind I'd had to earn all that money myself, instead of taking it from peasants - today at least, I got to feel like the lord of the manor.