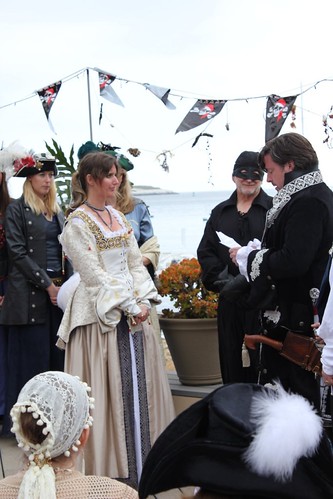 Here we are - exactly one year later. Here's a picture of me reading the vows below to you. You look dubious in this picture, I hope the intervening year has inspired a little more faith!

My heart will be yours forever; with love and compassion given freely and always.

From you; my inspiration in all things; every journey of discovery or excellence will find its end just as it began, with you.

For our family, I will be always learning; and I will share what I learn to everyone’s benefit.

I take your family as my own, and will defend and support them as the blood of my blood.

As I love you, I will love them, and as our family grows I will be ever more blessed with a greater sum of love.

For our friends, I will share always with you our adventures and interests together.

The circle of people we love make our joys more joyous, our woes more bearable, and every experience more vibrant; the strength and joy you give me I will share with them to return to you ten-fold.

The people in our life together have enriched every blessing we share; we are fortunate for their wishes and work today – I honor them as they honored us, and all in the name of honoring you.

Years of my youth were wasted not;

Finally finding my heart of hearts.

And all the sum of my parts.

We got up and had breakfast at Fernlee house, prepared by the house's owner. It included haggis as part of the 'cooked breakfast' which, as haggis is the chieftain of the pudding race, made me quite happy. I chatted with the proprietor for a little while about haggis, apparently my keen appreciation for it is not much shared by most American travellers. However, she allowed that they had a sausage delivery service that provided daily or so their meat-needs for the following day. Another example of the UK just doin' it better than we do. So that's....sausage, cider and pastry, so far.

After packing up and heading out of Stranraer; and with

pyr8queen driving this time, we headed out to nearby Kennedy Castle. I have a bit of a fascination with birds, and this turned out to be a great place to look at birds. I like "bird looking" as more than "bird watching" because, let's face it, once I've seen the bird, I'm basically done. I'm not going to follow it around and see what it has for elevensies with its neighbors. 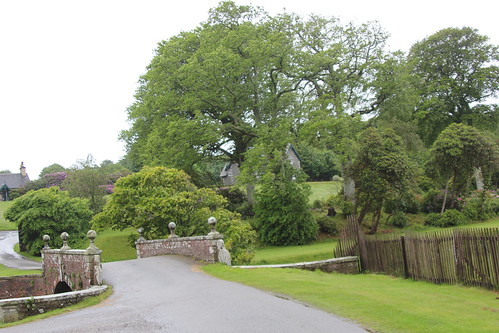