5/21/12
We had an early ferry from Belfast to Scotland, so we got up and head breakfast at the "RGB Restaurant" at the Park Inn - the afore-mentioned White Star/Titanic themed place. It was a Full Irish, but buffet style, which was a new thing. Not as good as the breakfasts we'd had at various B&B's, but it came with the room, so hey, why not.

In the cab on the way to the ferry port, the cabbie rattled on about the Titanic and its significance to Belfast (where it was built) especially considering the approaching Centennial. At least, I *think* that's what he was rattling on about, but the Belfast accent is amazingly difficult for me to understand. I need subtitles. I mean, they're speaking English, but I only get maybe one in three words. Now listen, I work with non-native speakers of English almost exclusively, and understanding heavily inflected English is practically a professional skill for me. But Northern Ireland? Not even the thickest Glaswegian brogue can compare to Belfast for incomprehensibility. I absolutely loved listening to it, but I'll be darned if I knew what people were saying to me.

So we got on the ferry to Scotland. When I heard we were taking a ferry, I imagined something like the Staten Island ferry, a flat boat that you drive a car up onto. No indeed. The HSS Stena was an enormous catamaran, a floating island far larger than any cruise ship, and powered by gargantuan, titanic turbine engines. 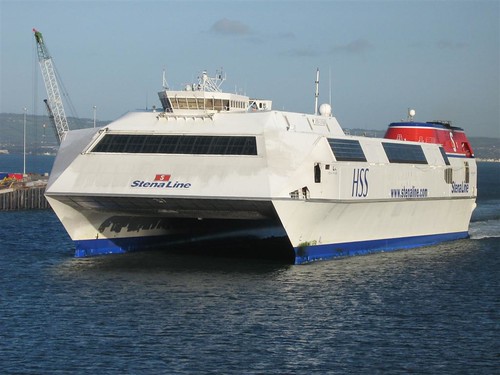 Apparently its since been decomissioned and replaced by an even faster ferry, which no longer runs between Belfast and Stranraer, but another more distant (but more convenient) point in Scotland. The ferry building was much like an airport, and without any trouble we checked our bags through, passed through customs, and didn't get pulled aside for additional screening. Several people were pulled aside for screening, and guess what? None of them were white. Racial profiling - alive and well in the UK!

Being on the ferry is not at all like being on a boat, the motion of the sea was barely noticeable, and the sound of the turbines was much more like an airplane than anything else. It was a placid crossing, with duty free shops, bars, cafes, gambling - you name it. I just found a nice seat at the bow, amongst the huge swarms of English bikers who were also on board, and read a book. 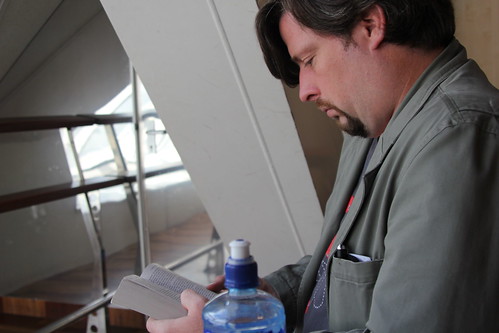 We found out later there had been a motorcycle road race and convention of sorts, like Daytona's bike week, in Belfast. English bikers tend to wear garish leathers, ride sport bikes, and have very short hair. They are nowhere near as intimidating as bikers in the U.S. The trip was fairly short, and before we knew it, we were disembarking in Stranraer, Scotland. We collected our luggage and rental care from the much less sophisticated ferry port. Stranraer is a sleepy little town that mostly exists to feed the port. It is on an isthmus that provides natural shelter from the Irish Sea, which is rife with storms, squalls and high seas that make good harbor desirable. This part of the Western coast of Scotland, in Dumfries and Galloway, lies astride the warmest part of the Atlantic current, which makes the climate mild. Stranraerians (or if they live on the loch side of the town, Clayholers) are quite proud of their palm trees, the only ones that grow in Scotland without artificial shelter.

I have now told you almost everything interesting about Stranraer.

We checked into our room at a B&B called the Fernlea House. It was on a modest street of red brick buildings that were not unlike the homes of Chestnut Hill in my own native Philadelphia. All around in Stranraer was a species of crow I'd not seen before, the Hooded Crow or Corbie. 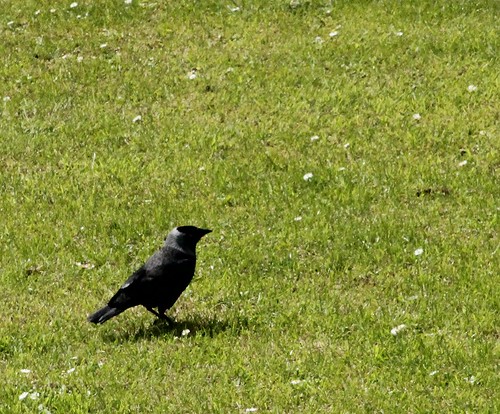 Fernlea House was pleasant but sleepy, and it was still fairly early on a Sunday, so we set out to explore a bit. As was par for the course in this entire trip, all exploring had to be done on foot, with little mercy or consideration shown for my ruptured fascia tendons.

We inspected Stranraer Castle, also known as the Castle of St. John. It has been a fort, a prison, a seat of government...and is now just an interesting thing to look at. 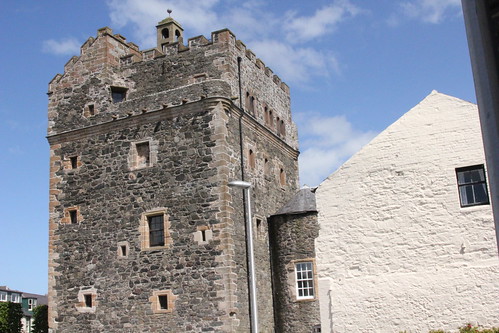 Unlike the other castle in town, which is a hotel, and the world's first with its own indoor curling rink. Stranraer, if it is famous for anything, is famous for curling. We had a little bit of ice cream (rum raisin) at a place called the Coral Cafe, but found that it being a Sunday, most of the town was shut down and rolled up, as quiet as a Mormon bawdy-house.

All this might sounds as if I don't like Stranraer, but that's not true at all. It had a quiet charm that wasn't at all brooding, but rather just sort of cozy and slow, like an afternoon nap. The skies were quite dramatic, and the ramshackle buildings had a dilapidated charm that gradually creeps up on you, like a kitten stalking your ankle. 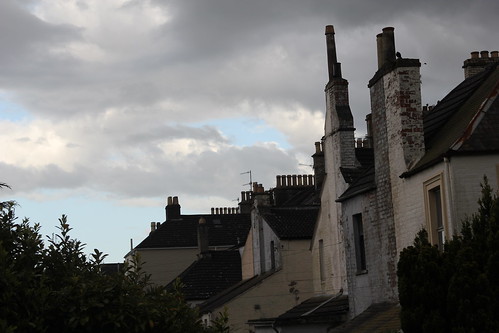 As with Ireland, everything was shockingly green, especially when compared to the sere and barren expanses of Southern California. Our wanderings took us down to the waterfront, where we had a "Bellhaven's Best" in a shorefront pub called the Marina Bar. All of the other patrons were men in track pants and footie shirts, which at first I thought was just how Scottish dudes dressed. It gradually dawned on me that it was Sunday, and they were all gathering to watch footie matches, so maybe it's not entirely de-rigeur.

The atmosphere at the Marina wasn't terribly convivial, and it was sort of a charmless, tile-floored place we'd only chosen because my feet were tired. So we rambled on until we found the Bridge Arms, a much more traditional looking pub. These were, I swear, the only two places open in Stranraer. There was quite a crowd at the Arms, and I had myself a Tenent's before switching back to Belhaven's Best. Belhaven's Best is an ale not unlike say Bass, or Newcastle, but it's even chewier than those beers, and served from a nitrous tap, giving it a creamy, toothsome quality of which I was really enamored. On my way back for another, I struck up a conversation with another patron about the footie match everyone was shouting about. It was a pretty big day, apparently, the relegation or "Survival Sunday" match between Manchester United and Blackpool. If Blackpool won, they'd remain in the premiere league, but they'd had the bad luck to draw Man U. to play against, one of the best teams in the sport. It looked for a while that they might even pull it off, and they were briefly ahead - but by late in the game Blackpool were all completely worn out, while Manchester was still going strong and scored two unanswered points in the last few minutes.

We liked the Bridge Arms, but it was getting on supper time and we were peckish, so we moved on to the "Starfish Restaurant," which was a fairly plain family-style place. I had chicken pie, because ...it comes in pie form!

It was still fairly early, but almost everything was shut down and we'd had enough of hanging around in pubs. Clearly I'm only part Scottish. We went back to our room, and to our delight discovered that the BBC was one week ahead on airing Dr. Who, and this was the night it was on - with a little tea and a nice room, it made for a pleasant evening.
Collapse