This day on the trip was one of our very best. Falconry! Spotting a legendary beast! Strolling the castle grounds! It was great.

We got up and had breakfast at the Dolmen House in Cong. It was comfortable and the Full Irish Breakfast excellent, and I recommend it if you happen to be visiting. We packed our bags and set out down the road to Ashford Castle, and saw a strange creature! 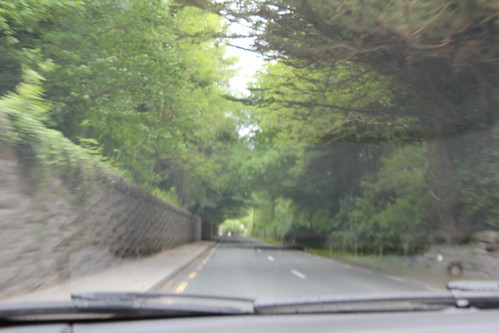 The creature was not in that picture, I fumbled the camera out too slow to catch it, unfortunately. Anyway, it was dark, probably black, and had a long tail and big paws. The tail swished back and forth like a cat's, and it was generally feline in the way it loped along the road. When we got close, I saw that it was about the size of a big dog, like a Rottweiler, or so, but its ears and tail were not dog-like. When it saw us, it ducked into the brush along the side of the road, and I missed getting a picture of it. I wondered aloud what kind of wild cats lived in Ireland, I wasn't aware of any - but we were on our way to Ireland's School of Falconry, where I reasoned some people with knowledge of animals would be working.

We arrived early at Ashford Castle, and wandered around the exterior and as much of the interior as they would allow. The castle is an imposing granite structure that was first founded in 1228, and was given a modern renovation and turned into a hotel and conference center some time ago. It as played host to many important functions, probably most famously to President Reagan in the 1980's. It sits on the shore of Lough Corrib, and is now a five star hotel. We had intended to stay there, but there was a big event as well as a couple of weddings there, so it was booked solid months ahead of time. This all turned out fine, because we ended up staying at another castle (more on that later!) in Scotland, which we loved, and wouldn't have seen the Lucky Bog Cat had we been in Ashford overnight. 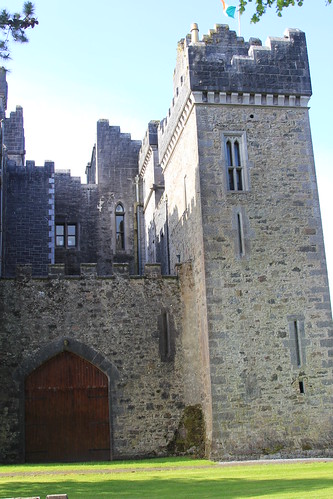