The first anniversary of our epic pirate wedding is coming up soon. I thought a nice warm up to that would be finally putting down on "paper" (paper anniversary, get it?) the notes I took during the trip, and some of the pictures. So every day I'll detail one of the days of our trip. I kept a little field notebook with me during the trip, and noted where we went, what we ate, stuff like that. I'm glad i did, too, because looking back over my notes, I wouldn't remember the name of the tiny tavern we had lunch on the West Coast of Ireland.

Our trip started two days after the wedding itself - we were married on Saturday, May 14th, 2011. On the 15th we sailed home from Catalina and spent the night at home, then left on the morning of the 16th for Dublin, Ireland. The flight was long and on the brutal side, since we were flying coach and I was quite compressed. We landed in Dublin at about 7AM local time. As it happens, I have a friend, Padraig from the Brotherhood Without Banners, who works literally at the Dublin airport, where he is someone incredibly important, I gather. He met us after our flight, and joined us for a cup of coffee/tea at an airport cafe. It was he that asked us if we were in town to visit the Queen, who was for the first time in 100 years, visiting the Republic of Ireland. We had no idea, and were entirely too busy to make time in our visit to spend any time with the Windsors. (Our continuing apology, Your Majesty, maybe next time.) We had also just missed the Obamas, but try as we might, were unable to make our schedules fit with theirs, either.

After touching base with Pod, who I haven't seen since LaCon in '06, we took a cab to our hostel in Temple Bar. It was then that the Queen's visit became an inconvenience. Most of the Irish Garda (police) were in Dublin for The Visit, and as far as I know, not to greet us. Much of the city was shut off, any place that the Queen might like to visit, might be in the vicinity of, pass by, or mention in casual conversation had been blocked off for security's sake. This included all of the part of Dublin where our hotel was, so we were dumped unceremoniously several blocks away. We had luggage for two weeks, so it wasn't terribly easy to lug around, and we didn't really know where we were going, and we were tired and jet-lagged. When we finally found the place, Barnacles Hostel, it seemed sketchy. The entryway was tiny and the staff behind a bulletproof glass partition. We also were not allowed to take our room until 3PM, but for a Euro per bag, we could stash them in a communal closet, overseen by the Eastern European waif who was working the front desk. I desperately wanted to shower and lay down, but such was not meant to be.

We stashed our stuff, not without some misgivings, and set out to kill the morning and early afternoon before we could go back and get a room. I was a sweaty, tired, jet-lagged grumpy bastard, basically. I was considerably bucked by my first ever Irish Cooked Breakfast, a glorious combination of sausage, bacon, eggs, white and black pudding, and fried tomato. That and some coffee was a fair restorative. I had this delight at a place called "Chapter 1" which was immediately next to Christ Church Cathedral. 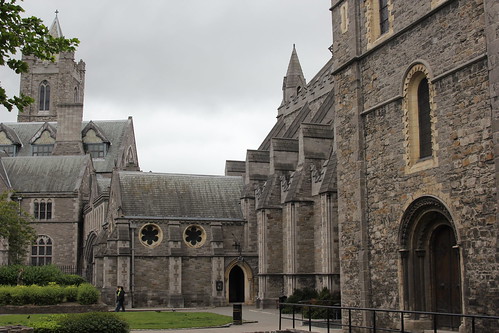 We investigated the Cathedral, and had another round of coffee in the basement cafe.

pyr8queen was very interested in the woodwork of the chairs, pulpits, statue plinths, etc. I was fascinated by the giant crazy bird. 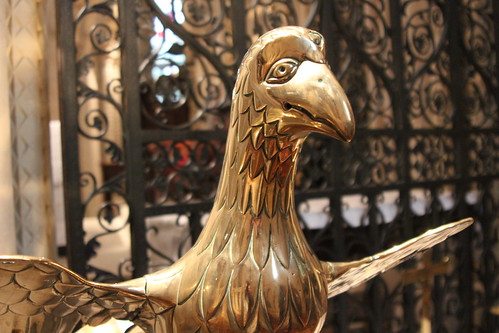 He's staring at you, and is skeptical about what he sees.

I had promised a fried I'd have a Guinness in the U.S. just before leaving, and another immediately upon arrival to test the theory that Guinness is better in Ireland. Sadly, the Guinness factory was closed due to Her Majesty, who is by all reports an impossible claigthsch liadhradhtnclh, which is Gaelic for "party animal" and pronounced "Clee".  So we found ourselves at one of Dublin's heritage pubs, specifically Kehoe's Heritage Pub. I had a Guinness, and can confirm it was indeed a fair sight better than the U.S. version - probably because it's fresh, and because the heritage pubs pay careful attention to storage, tapping, line cleanliness, and all the details. 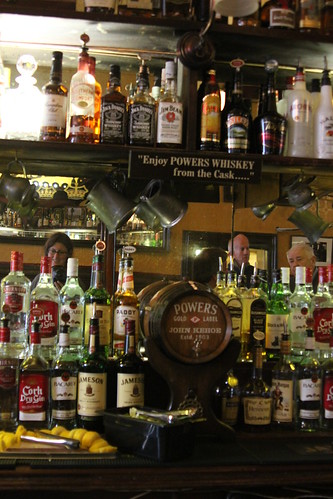 You probably think you know this pub. There are "Irish Pubs" in the states, after all. But if you haven't been to the real deal in Ireland,  you don't know what an Irish pub is. Until you've heard the creak of the ancient floorboards under your feet, smelled the brass polish and stale beer of hundreds of years of men, just like the ones now  holding forth on everything in the world at the end of the bar in their sweater-vests and caps, ducked your head under the low-hanging beams near the bathroom - the same way centuries of pub-goers from James Joyce to your uncle Bobby have; until you've felt that, breathed that, and lived that, you've just gotten a dishwater approximation; a Disney version of the real thing. We had a chat with the barman, who was enthusiastic about whiskies, and a big believer in Irish whiskey as a worthy drink. Our pick from the lot was Locke's Whiskey, and his personal favorite was the bargain-priced but very good Redbreast 12 Year.

Finally, disheveled and tired, we trudged back to the hostel and were at last permitted to check in. I took a blissful shower, and lay down for a bit - I awoke 90% less grumpy. Herself didn't want to be bothered with that silly resting stuff, and had wandered around those few areas of the city that weren't closed, and investigated some viking ruins. This wouldn't be news to the Irish, but I don't know if most Americans are aware that Dublin was a city founded by viking invaders, and much of Irish history involved the vikings and the English taking turns making things uncomfortable for the Irish.

When she got back up, we both cleaned up, and met The Devilbunny for dinner at place recommended by

parrismcb, Gallagher's Boxty House. A boxty is a traditional Irish dish that's like a potato crepe over some kind of generally savory stuffing. I say "traditional" but Pod had never actually heard of them, and certainly never had one, so it was an experience for him, too. You can see from the insane glint in his eye here, they were excellent. 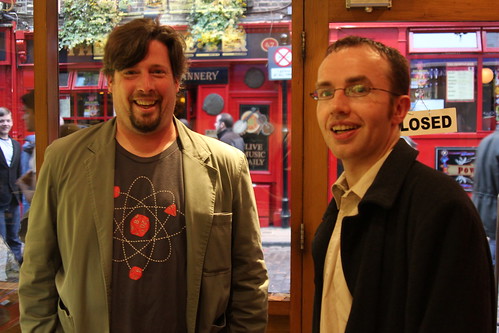 After dinner, Pod took us for a walk around Temple Bar and the River Liffey. 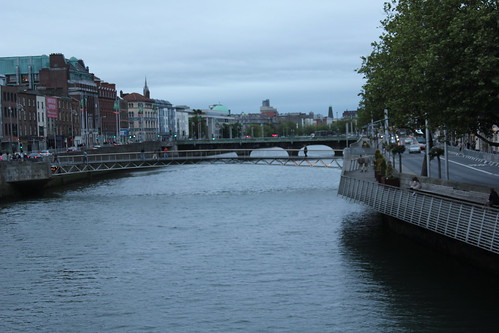 We had a round of drinks at the Ha'Penny Pub, right on the riverfront. In addition to the Royal Visit of Extreme Inconvenience, Dublin was also that week host to the finals of a football season between for second rung league champions. Both teams were from Portugal, and the fans had flooded the street and were loudly singing songs at each other. It was a little bit like hooliganism, and a little bit like West Side Story. I recorded a bit of it:


After watching the warring tribes for a bit, and full of food, booze and friendship, we finally retired to our room at Barnacles and I slept the sleep of the dead. And that was my first day in Ireland.
Collapse