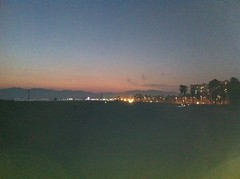 We brought back a lot of scotch from Scotland (like ya do) and we like pies. And then also, that rhymes with "Fourth of July", when I've traditionally had some sort of party.

So - scotch and pie on the fourth of July! I made Dave Chang's "Crack Pie"(tm), Strawberry pie, Smoked salmon fish pie, and steak-and-guinness pie. Pascale also put together a plum pie. I mean, I made the crust and baked it, but I'm not taking credit.

Friends gathered, and the scotch flowed. The whisky from Cuzlean Castle was given out in tiny amounts, but the big winner for the night and my favorite too was Ben Nevis, a cheapish whisky we picked up mostly because Ben Nevis is where "Monarch of the Glen" takes place.

After stuffing myself ridiculously, and being joined in gustatory excess by quite a few, we walked down to the beach to watch what fireworks we could. The Marina Del Rey and Santa Monica fireworks were cancelled due to the recession. Don't get me started on the idiocy of a political party forcing the issue of reducing the deficit without being willing to raise any taxes, at all, of any sort, or even to end tax breaks. No fireworks - there's your culprit.

There were some fireworks off in the distance in the Pacific Palisades and Malibu, quite visible along the coast to the North as it was a very clear night. So we sat on the beach; I read the Declaration of Independence for the fifth year running, the dog went berserk gamboling in the sand, and eventually we went home, full of pie, patriotic zeal, and fellowship.