I had a complicated dream about a huge flood that carried me back to my paternal grandfather's house, who it turns out had not really been dead since I was three years old. After spending some time with him, a pleasant old duffer who loving nothing more than building things with his hands, I decided to shove off home. However my car was still inundated in the flood, so I had to walk, first climbing over a block of row houses with such extensive sky-light windows that I feared smashing through and falling. It turned out to be inhabited by some friends who wanted to join me in my quest to get home, so we set off.

Eventually we were plagued by some fae creatures, only they weren't the cute and whimsical sprite kind, but the horrible and murderous sort. In the process of fighting them off, I acquired Excalibur. I also gave them silver to try and bribe them off, but they took it and then attacked again. I had made a mistake- once giving them the gift of silver they were no longer vulnerable to it! Excalibur, however, did the trick.

Excalibur in hand I set off again, but had to overcome a series of challenges before I could leave the city - the challenges overseen by Rob T. The final stage was a warehouse full of various stuff and the question, "With what would you best survive the zombies? Bring one thing back." The assortment there was everything from cooking implements to Star Wars figures and other toys to a handful of weapons. Annoyed that I was taking so long, Rob tried to hurry me up. "Ok, well I think the one thing I'd want to have to survive the Zombie Appocalypse is probably the Batman." I held up a Batman action figure. "Batman always wins."

Rob laughed and said that was an acceptable answer, but not really right. He informed me that I didn't really have to worry about it, I'd done so well at everything else that even if I just picked something because I wanted it, I'd only take 1/4 damage from this challenge, and still survive. I went looking for a sturdy shield or main gauche to match Excalibur.

Still ...probably should have gone with the Bat. 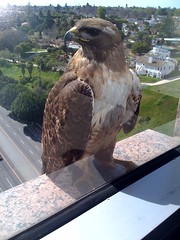 This red-tailed hawk landed on the sill outside the boss' office at work. He just hung out there for quite a while - long enough for my boss to send an email for everyone to come take a look.

The window is a one-way mirror, so the hawk had no idea we were on the other side, gawking at him. He (or she, really) is part of a pair that live at the Howard Hughes Center (where i work) that prey on the local pigeons and squirrels. We sometimes see them turning in a thermal to get height, level with us on the 13th floor. But this is certainly the closest they've ever come. In fact, aside from some notorious incidents like The Armadillo Incident, it's as close to a wild animal as I've been. At least, without some sort of panic being involved.

It's hard to tell in this photo, but a bit clearer in this one that his talons are truly wicked looking - long and needle-sharp.

He stood there for quite a while, and I got right up next to him, staring right into his brown eyes, and all without him even knowing it. He's about the size of a cat on the smallish side, very close to Dummy's size, in fact.

Later, my boss posted some pictures he took, one of which featured him flapping his wings when a passing car honked and startled him. I am quite glad I'm not a pigeon or a squirrel.