It's Monday, so it oughta be music, but

joemorf did this really cool thing, and it's lyrical so that's close enough.
Please vote "no" on Prop 8, in California.

"The greatest of these is love." 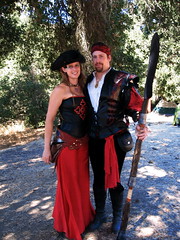 So what could be better than a weekend where

pyr8queen and i went camping, dressed like fancy pirates and hit nerds with padded weapons together? We went to Decker Canyon Campground for

trekhead's LARP, Dying Kingdoms. It was ungodly hot in the canyons (though pleasant down by the beach, oddly) and extremely dusty. Also I seemed to attract very gnat in Malibu. And we had an alarmcrow that cawed at our tent at the hour it felt it was appropriate for us to awake, but that was more amusing than annoying.

We borrowed a gigantic tent, which was the right move - room enough to stand up and move around comfortably, plus space for the air mattress and all of our gear. We brought a ridiculous amount of gear, so in a couple of weeks when we head up to

robmcdiarmid's gig, ApocaLARP, maybe we'll bring less. But we ate well every day, and had hot fresh coffee on demand, so all thigns considered that's pretty posh camping. Maybe a swimming pool and a helper monkey would have been improvement. Oh, plus more bacon.

Despite our stated intent, after the event, to have an easy day with a brief sail and relaxing, we ended up working on the boat, sailing, walking around the Abbot-Kinney Festival, going shopping, and then finally getting to slow down in the evening. I'm still picking dust-boogers, however. Which is one of the first times, post-Army, that it's happened...and not one of the handful of things about military stuff that I actually miss.

blanchemains sent me a link to this article, and asked my opinion. Here it is:

I have mixed feelings about this, as you might imagine. First, having an active-duty combat brigade with a mission in CONUS is a bad precedent. It's one thing to garrison a unit, which they almost always are - and another thing to transfer command to a joint operations group - meaning they're not just training, but *doing* things. I think that's a dangerous precedent, though on the face of it, it's not inherently bad. it is, however, a departure from how we've always done business, and given the unprecedented power of the Executive branch in the past eight years, maybe something that deserves some scrutiny.

Too, this bit bothered me: Don’t look for any extra time off, though. The at-home mission does not take the place of scheduled combat-zone deployments and will take place during the so-called dwell time a unit gets to reset and regenerate after a deployment.

That's guaranteed to reduce combat effectiveness of the unit, and place an additional burden on reservists and families. Active duty soldiers ..well, a mission on the streets is no more or less onerous than one in the training area - it's one's full time job. But for a reservist, it's the same as being deployed; no civillian job, military pay, no liberty, etc. It's a big burden. It means that they'll lose soldiers to attrition, and have relatively little chance to replace them.

On the plus side, I've said for a while that the military has a large war-fighting branch. It needs a peace-keeping branch. None of the current branches are trained or equipped for that - their job (and they're good at it) is to find our nation's enemies, and defeat them on the battlefield, destroying their capability and will to fight. Pacifying, occupying or supporting foreign territory is not part of that mission, and is a fundamentally different posture with different skills, tactics, equipment and doctrine called for. Badging a combat brigade to do that, rather than fight war is perhaps wise, and if it works may well result in some fundamental doctrinal or organizational change that I think is badly needed. A thousand years of military tradition says the Army is for fighting - but 50 years of exigency says some new force is called for. Maybe this is the seeds of that, and maybe it's a good start.
Collapse