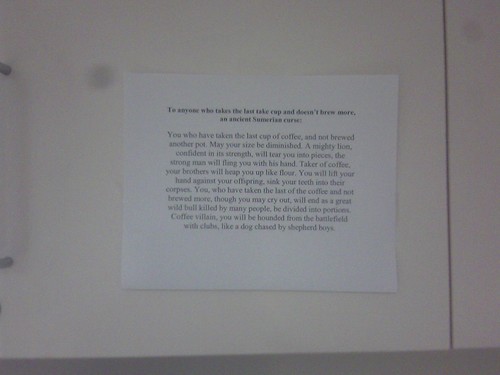 0522081036.jpg
Originally uploaded by aghrivaine
Since i put this up, no one has emptied the pot without making more!

Late yesterday I got a pretty difficult request at work - the kind of thing that sounds easy to non-technical people but is, in fact, massively complicated. It looked like we were in luck, that something similar had been set up in the past and that would just work. But no, alas, no such good fortune.

So I spent today untangling a series of very complicated issues, all urgent, and all handed down from the highest levels - all for something that seems like it ought to be very easy. I finally figured it out, after messing around with firewall rules, entropy-gathering policy for the encryption, password policies and shell variables for users - plus a bunch of dead ends in the ftp protocol, network security, and system patch level. This was mindbending.

So I felt pretty happy that I fixed it, and just in the nick of time, too. If techie stuff were sexier, it would have been a very flashy save - as it is, I just have to revel in the intellectual satisfaction. And it also made me realize just how much I've learned at my last couple of jobs. My skills as a unix dude are quite a bit deeper; I've added a lot of networking kung-fu and other of the non-basic sysadmin skills. Sometimes I worry that I don't learn enough on the job, but it's moments like these that make me realize I really have been slowly growing more competent, and not just getting by with what I already know.

I don't think when I was a kid, I'd have envisioned this as my career. But then, being an astronaut turned out not to be practical, and I'm still working on being a writer. But if I went back in time and told 12 year old me what life would look like at 36, I'd probably be pleased. Working with computers in the movie industry, living on the freakiest beach in the world, writing, acting and singing for fun ... yep, 12 year old me would think that was pretty cool.

Except that I still don't have a dog.
Collapse