Today on Salon.com there's an article about nerds (The Beauty of the Geek). An author called Benjamin Nugent has written a book, "American Nerd" that explores what nerdiness is, where it comes from, and the place of the nerd in American culture.

It's pure bullshit. I disagree with this stupid definition of what a nerd is, "After spending a lot of time with different subcultures that I intuitively knew were nerdy, I figured out what they all had in common: a love of rules, a love of hierarchies that were meritocratic and open to everybody, and in some cases the affectation of rationalism (whether computer programming or math). Ham radio operators kept using Morse code long after they had to, because they saw it as a purely rational form of language. That seems to me to be a common trait of the Society for Creative Anachronism, and kids on debate teams, and computer programmers."

While it's certainly true that a sub-section of the nerd herd are your math geeks and hall monitors, this misses so much as to render Mr. Nugent's expertise almost ludicrously unsound. There are many nerds who resent rules and systems, and that's a truly foolish distinction to make - and even more nerds who are as happy being absurdist and chaotic as they are "loving hierarchies". Balderdash.

No, a nerd is an unathletic smart kid with offbeat or poor social skills. It's really that simple. Doesn't matter if you're debate team or Trekkie, gamer or math geek - there are no dumb nerds, there are no jock-nerd hybrids, and there are no super-smooth popular nerds.

That doesn't mean that no nerd is fit; but if you're a competitive player on a team sport, you're not a nerd. Nerds might go out for the football team to prove a point, but they'll either be really bad at it, or if they do excel, will find a niche in society which can no longer be described as nerdy. Possible exceptions - long distance runners and martial arts; both individual sports.

There are no dumb nerds. In order to take the prestige class "nerd", you must have a minimum INT score of 12. This is known.

And there are no nerds that really smooth talkers, popular, or mainstream sociable. There may well be nerds that are funny, bright, and fun to talk to - even individually liked by lots of people; but something off-beat or downright weird about them will keep them from being one of the "popular kids". They might be good looking, might be charismatic, might be very well-regarded by parents, teachers, and peers - but everyone has an instinctive notion of whether another person is popular or not, and a nerd, no matter how well liked, will always register as "not popular". Their unpopularity may range anywhere from despised outcast to amusing odd-ball, but popular? Never.

Nerd is a social construct. Love of rules? Love of hierarchies? I'm surprised this guy is given any credibility at all. I'm sure we could all come up with a dozen counter-examples to his definition. He further implies that everyone with Aspberger's Syndrome is a nerd, and doesn't make clear that not all nerds have Aspbergers. I found this interview ridiculous and annoying. 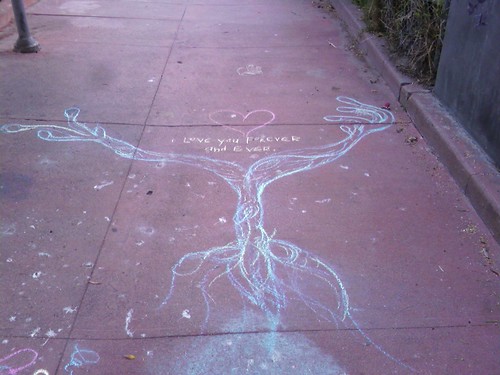 0520081805.jpg
Originally uploaded by aghrivaine
On the sidewalk on my street - someone's in loooooove!
Collapse