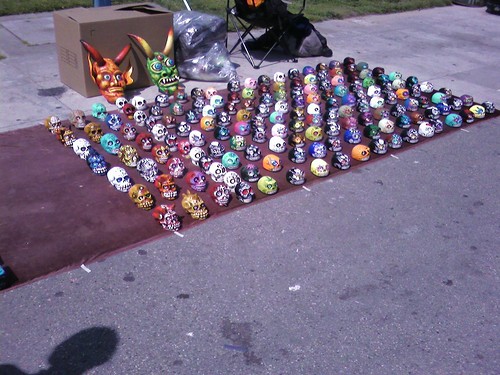 0425081057.jpg
Originally uploaded by aghrivaine
Anyone need a skull?

I've ranted commented before on my loathing of bad cellphone etiquette, with the hope that as the technology becomes a natural part of culture, we'll evolve the appropriate social rules for its use. Not only has nothing improved, however, things have gotten worse. I'm afraid I'm the odd man out in deploring it, too. At first I found it siimply apalling that people would take calls at the table in a restaurant, or while sharing a car with other people. Now that's become entirely commonplace - and whole new transgressions have risen up to replace them

I was simply astonished to note that several people in the night course I'm taking (classical voice) actually answer their phones, and take calls - IN CLASS. At first it was just a couple of young women who had not been in the U.S. very long, so I wondered if it was perhaps a cultural thing. But last week some members of the same class in a different time slot joined us for the evening, and two of them - both Americans - took calls and carried on a conversation while the class was going on. One took a call, and at LEAST excused herself to carry on her conversation out in the hallway, which is I suppose better than just chatting away right there in class. But even so, the very idea of contemplating taking a call during class at all just blows my mind.

Have I been left behind on this one? Is this a "you goddamn kids keep offa my lawn" kind of thing?

Another mystifying trend, though not as odious - people who can't be bothered to talk to me or keep in touch, and in at least one case who outright won't talk to me - still regularly sends requests for facebook applications. If you're not talking to someone, doesn't it logically follow that you shouldn't also be poking/spanking/attacking/finding out your kama sutra position, too? Is this an attempt at bridging the gap of silence, or just an indication that clicking on such things on facebook is truly impersonal and irrelevant, and thus just doesn't count as communication?

Any day know, I'm going to be out on that lawn with the garden hose, yelling at these kids with their hair and the music and the clothes.
Collapse