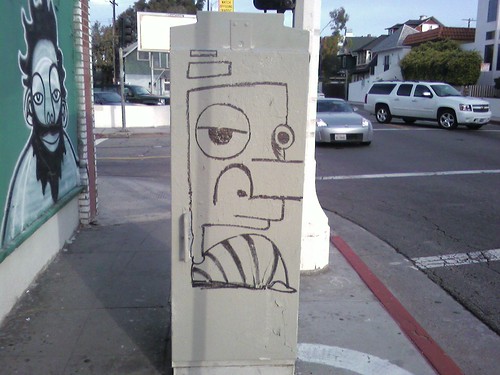 There was Davy 1.0 - he was pure meat. 100% natural. But now there's Davy 2.0 - with eyeball lasers!
I went in first thing this morning. There was a lot of rigamarole, and paperwork. Once done, the doctor speedily briefed me on what to do, dilated my eyes, took a zillion different pictures - and next thing you know, I had the odd sensation of a big machine pushing down RIGHT on my eyeball - then there was nothing but light. My god, it's full of stars. (did I mention the Xanax?)

Then, another machine. And I had the strange sensation of smelling my own eyball burning as the lasers zapped away what nature gave me, but I didn't need. It smelled quite a bit like burning hair, really - if you've ever singed the back of your hand lighting a fire or something. I've smelled some weird stuff in my life - that firing range at Ft. Drum that hadn't had its latrine cleaned in thirty odd years, for instance. Or the weird banana chemical they use to test gas masks. Burning white phospherous. My own house, and all its contents, smouldering on Halloween night.

Now I"m covered in plastic not unlike a bug, and doped to the gills, and told to stay in a dim room with no tv, no computer, and no reading. You can see how well that's going...
Collapse