I got out around 2 in the afternoon, and it was just reaching high tide. And by the by, the local surf reports NEVER get the tides right - it'll say "High Tide at 5pm" and I go out at 3 and it's clearly at the high water mark. Bastardos!

Anyway, the waves were incredibly flat yesterday. Once in a while a nice roller would come through, but for the most part it was just foamy whitewater. Still, any day on the water is a good day.
It was grey and cloudy and once or twice sort of half thought about raining - spat tentatively a few times and stopped, like an asthmatic at a watermelon seed spitting contest. There were quite a few surfers out, though - which is I guess not surprising for a Sunday afternoon at high tide.

So, in short, I had plenty of time to bob up and down and enjoy the view - but not a lot to look at. I was delighted, though, when a line of pelicans zoomed by very close. At first it looked like two pelicans followed by two wannabe-pelican cormorants: smaller dark birds with sharp-set wings and pointy beaks. But I realized it was actually two juvenile pelicans, apparently learning their trade from their parents. There's a never a seabird I've seen that I didn't think was amazing - but this was the first time I'd seen baby pelicans. I swear, I'm going to take up bird-watching.

I caught a few (waves, not shore-birds), but it was such a slow day I packed it in. Also, my suit is kind of weird in that it really, really conforms to the body - so much so that even if I pull it out and stretch it, it just bring the skin with it. So uh.. my junk was kind of smashed, and it was impossible to shift it to something more comfortable. Christ, imagine if you were an astronaut, and that happened on a spacewalk?

So I'm walking back home when I see this guy - one of the Venice weirdos who makes it a charming place to live - hassling a couple of obviously foreign tourist girls. He's this tall, very very dark-skinned black guy who wears a black tarp fashioned into a cloak with a cowl that covers his head like
some sort of weird boardwalk prophet. I see him walking around smiling all the time, I know he's harmless - but clearly these two girls don't, and maybe don't understand what hey's saying. So I stop, plant my board, and point at him. I declare in as loud and deep a voice as I can, "Get thee behind me, Voldemort! By the power of Potter I compel thee!"

He spun around, confused at first. Then he laughs, "Who the hell are you?"

"Don't you know? I'm the Silver Surfer, Herald of Galactus - weilder of the Power Cosmic! Don't make me get all Norin Radd on your ass."

He laughed again, and glanced around - realizing that the girls had slipped off while he was distracted. I can only imagine the stories their telling their friends back in East Latveria, or wherever they were from.

It's a shame they didn't stick around, Galactus might have liked to have a word with them. 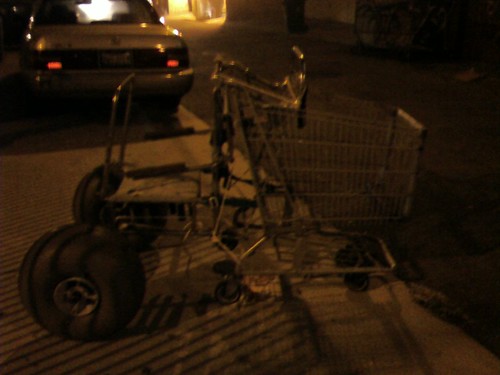 1119071957.jpg
Originally uploaded by aghrivaine
What the? just sittin in an alley in venice... 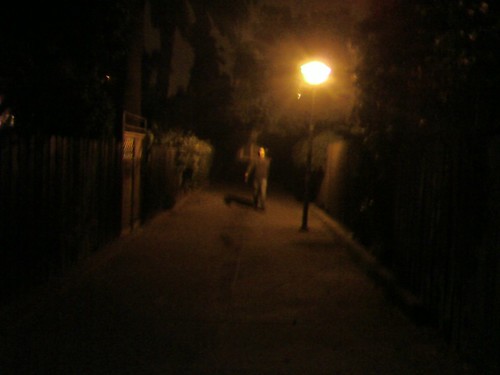 1119071959.jpg
Originally uploaded by aghrivaine
From out of another foggy night emerges... bob!
Collapse