I've just finisehd reading both "The Children of Hurin" by J.R.R. Tolkien, and "Pattern Recognition" by William Gibson - two recent offerings from past masters who in many ways defined the genres in which they wrote.

"The Children of Hurin", the story of Turin Turambar, was previously recounted in whole in "The Silmarillion" as well as in fragments in Christopher Tolkien's "History of Middle-Earth". Christopher inherited his father's literary estate, which was approximately as organized as a Baghdad bomb-souk on market day. His father tended to write bursts of things, then put them down for 30 years, and come back to them later ...leaving zillions of fragments, but very little cohesive. The elder Tolkien tried on several occasions to complete the story of Hurin's children in the form of an epic poem in much the same alliterative first-word-rhyming style of "Beowulf". Fragments of that work, which are lyrical and evocative as well as masterfully done, are in the appendix of the book. The book itself fleshes out the scaled-down tellings previously published - still in Tolkien's original words, but painstakingly reconstructive.

Tolkien's writing is as remarkable as ever - he's at his best in the high-cant of which the lays in Silmarillion consist. If that old style of tale-telling pleases you not, then surely here shall you find no succor, nor pleasure, nor even peace. But if it be your passion, if it evoke in you joy to dispel the most fell of Morgoth's shadow - then read on. Even if the style isn't to your liking, the story itself is immaculate. No detail fails to further the greater story, no character - no matter how irrelevant his various grandfathers, aunties and sons might seem - doesn't ultimately play some part. And the story itself is an elegaic down-spiral of a valorous hero reduced by the spite of Morgoth - a doom in which he himsef is complicit, which to his sorrow he finally comes to understand. Everything weaves together beautifully. It is both ornate and spare all at once - and I loved it very much. However, Turin is an asshole. Yeah, I said it.

"Pattern Recognition" is a very different sort of animal, and a departure for Gibson. Starting with the genre-defining cyberpunk novel, "Neuromancer" Gibson has always been a futurist, as well as a top-notch stylist. The first line of "Neuromancer" still stands out in my memory as being a perfect first line; "The sky was the color of a tv tuned to a dead channel." BAM - welcome to the 21st century, and it sucks. "Pattern Recognition", while every bit as immediate, driving and tight as previous works, is set in the present, a few years after 9/11. The main character, Cayce Pollard (and the main character in "Neuromancer" is Case, a different person, even different gender) has a severe allergy to marketing logos, and an inexplicable ability to identify what's "cool" so that marketing people can then commoditize it, rendering her allergic. Her primary social group is a usenet forum dedicated to a mysterious series of short movie clips posted anonymously on the internet. What the footage is, and who it's by is the central mystery in the story. Cayce's life is Gibson's comment on the 21st Century - she spends relatively little time with people face-to-face but lots of time online. She feuds with people she doesn't know because of their opinions online, and bonds with others. More than anything - it's the incessant branding that calls out the 21st so clearly. Cayce doesn't have a bomber jacket, she has a "Rickson's" because of the designer's name. And it's never her jacket - it's always "The Rickson's". She doesn't have a coffee, she has a Starbucks - it's not a taxi, it's a Fairway (they're in London); her friend isn't wearing shoes, like a normal person - they're Doc Martens. In fact, the branding is so incessant it's a bit irritating - the constant buzz and drone of marketing in the real 21st Century is dreary enough - to have it thrown in my face so constantly in a book stands in the way of telling the story. No doubt the harshness is a stylistic choice on Gibson's part. One I hated. But then, I hate marketing, so it all makes sense now, dunnit?

Still Gibsons work is as sharp as ever - his particular style is well-suited to a dyspeptic modernist mystery-over-trivia, and his view of the future might have been bleak and grimy, but his view of the world around him today is no more cheering. At least, unlike Tolkien, we're not in a slow downward spiral into doom - to Gibson, we're already there. 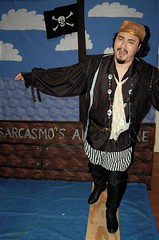 DSC_0031.JPG
Originally uploaded by Babyraven.
My entry: "Hey Peter, I can see your house from up here!"
Collapse