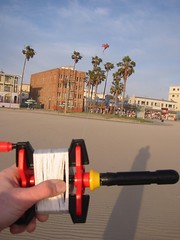 I've had a pirate galleon kite sitting on my balcony waiting for just such an occasion. Hmm. Gym, or kite flying? I couldn't go fly the kite after the gym, because the sun would have set. Obviously, I chose the kite.

The Queen of Heaven (as I call her) had already blown off the peg she was hanging from on my balcony, but fortunately caught on the railing on the far side, there to wait my return. I changed into shorts, and threw on some raver-goggles that I wasn't sure why I owned, but were clearly perfect for keeping sand out of my eyes. I grabbed the kite, hooked up the string and reel, and headed for the beach.

I made it about two steps before the Queen of Heaven's sails caught, filled, and snapped taught. I had to fight her all the way down to the beach. Before I even got to the end of my block, I gave up and just let her float a few feet over my head, snapping back and forth like a berserk balloon, or a mad-dog on a leash. Every person I passed on the street or at the boardwalk said, "Good luck with that!" or something to that effect.

Out on the beach I was glad of the goggles. I let the kite out a little, and it whipped off and away so fast the the string burnt my finger running through it. I finally got her under control - but the wind wouldn't carry her up, just away. No matter how much line I let out, the kite remained about fifty feet off the ground - you can see it in this photo. The sails made a sharp crackling, like distant musket-fire, and the Queen of Heaven strained at the line to take off and away.

But there's a simple pleasure in just standing on a windy beach, looking up at your kite. I felt connected in time and space to childhood vacations at the Jersey shore, to flying kites in Valley Forge park over the summer - to a lot of times that were carefree, simple, and sunny.

Eventually the Queen's snapping took on a particularly frantic air, and I observed that she was trailing her mainmast, that had snapped and gone by the board. Her maiden voyage, and she'd been dismasted! I reeled her in, and brought her back to port.

Before I even had her docked to affect some sort of repairs, she was attacked by a horrible gigantic cat-monster. All hands were lost, and the ship was unsalvageable, I'm afraid. There's a picture of the assault here The Horrible Assault on the Queen of Heaven
Collapse