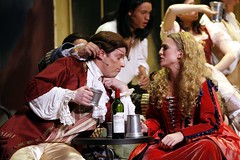 ohhyeah
Originally uploaded by aghrivaine.
So, we sort of quasi-opened last nigt - a show for a "student review"; half priced tickets for students. Many of the audience were High School kids, some of whom exhibited abominable behavior; making faces at the cast, laughing at missed notes.

Still, it was a full house, the show was sold out. They warmed up over time - but audience aside, it was the first performance we've had - ever - that was a straight run-through with every prop, costume, and set-piece. That at least, was rewarding - there were no major errors, and other than a few late entrances (myself included) it went without a hitch.

And here I offer you photographic evidence of the best part of the show.

Well, this is just disgustingly cute.
I sure would like to hold hands with an otter.