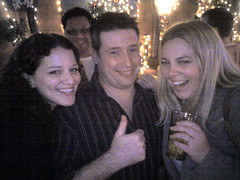 xmas_shenanigans
Originally uploaded by aghrivaine.
As you can see from this picture, I was quite merry. And this was before the Aikido vs. Jiujutsu wrasslin' in the parking lot, before bellowing to the VP that I wouldn't let my extremely drunk coworker down because "Rangers never leave a man behind" - and before heading out to meet a lovely young lady who I then annoyed the crap out of with a heated political discussion.

So yeah, quite a party. The rest of the weekend featured Lord of the Rings Online (liking it more), Eragon (which is a remake of Star Wars, almost frame for frame) and gaming. Other highlights include finally getting a landline, via Skype (which I will explain in detail later), and getting my bank account frozen because I made a series of atypical purchases. (Gee, BoA, who on EARTH would spend a lot of money just before Christmas on items obviously not for himself? Jeez!) and finally breaking down and buying an electric blanket because yes, it actually does get cold down by the beach at night.

The cat was mystifed by the electric blanket. She hopped up on the bed, and then shot right off like she'd been scalded. Then she tentatively got back on it, sniffing at it like, "What sorcery is THIS?" Then she decided it was pretty much the best thing ever, and licked it. Thereafter, I had a very hard time getting under the electric blanket myself, because the cat wanted it all to herself, and was vocally and emphatically displeased when I shifted her out of smack in the middle of the only warm spot in the apartment.