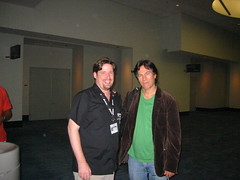 Davy&Hatch
Originally uploaded by aghrivaine.
So last weekend, and this is a much belated entry - was GenCon SoCal. I went because once again La Sangre de Los Angeles was running an event there. This year I was determined to actually DO stuff though, and I did, and it was a lot of fun.

On Day one I entered a "World of Warcraft" card game tournament, in which I was roundly whipped by young children and old ladies. When you say "whipped" like that, you have to pronounce the "H" first, and emphatically in order to express just how poorly I did in that tournament. I did get to keep the cards I opened at the event though, which was sort of my whole point. That night

joemorph and I tied one on, mostly by accident, and were truly legless by the time his basically unamused girlfriend got home.

Day two, I entered the Vs. system Pro Circuit Qualifier - again mostly to get the cards you get to keep. I've resisted the lure of CCG's for years, but

scottgardner got me hooked. I ended up doing tolerably well in the tournament too, but the combination of my brutal hangover (reference earlier leglessness) and a couple of rookie mistakes cost me some matches. Also, I'm pretty sure one guy was cheating - though didn't make an issue of it at the event.
One high point of the weekend was getting to meet Richard Hatch - the original Apollo on Battlestar Galactica, and the current Vice-President Tom Zarek. He was shilling for The Great War of Magellan which he wrote and directed, and apparently is debuting - in concert with a related gaming event - at .. uh, either Gencon Indy or Origins. Anyway, I finally couldn't resist my fanboyism anymore, and posed for a picture - which broke the dam, and then the floodwaters of fanboys jumped in with me. Now that I'm thinking about this all in one place, there was a lot of embarassment for me this weekend. Not leastwise because I appear to be some sort of beached cetacean in this photograph.

The rest of the weekend is a bit of a blur, between running around getting ready for our event.... and recovering from earlier excess just in time to utterly outdo it by bringing (and consuming!) a bottle of Rumpleminze - aka - "copkiller" to the after-game party. I vaguely recall randomly throwing a painful wrist-lock on

joemorph,and then, in order to clear the room, stripping on the bed. No one wanted to see that, least of all me. In my defense, it was my hotel room, and it was 4am, and I really did want them to get the hell out. However, there's a reason i've avoided copkiller all these years, and it has a lot to do with WHY we call it copkiller. I humbly apologize for my wretched, filthy excess that night - and especially for various drunken text-messages and phonecalls.

Other than the hungover haze that I checked out in, managed to lose a very valuable deck of Vs. cards, fought in a "boffer" fencing tournament and was unjustly beaten by a cheater, and an espionage game in which I might not have won, but my team thoroughly obfuscated the solution for everyone else - so hey, it's a sort of victory. Or something.

GenCon was a ton of fun this year - moreso than last. They do get you coming and going in terms of your pocket book though, dang.
Collapse